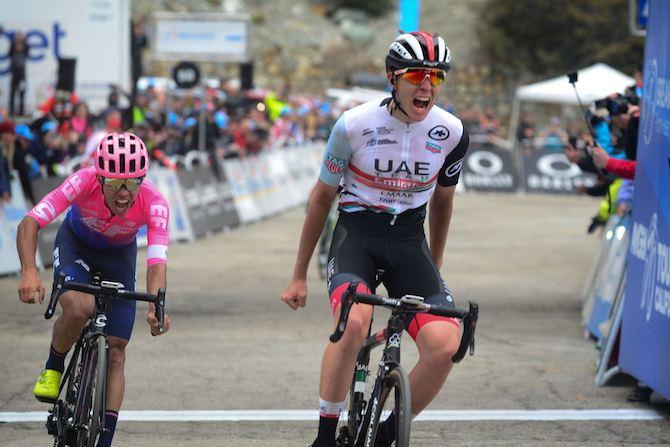 Tadej Pogacar snatched victory in the final few metres of a thrilling sixth stage on the Tour of California on Friday, swooping past Sergio Higuita on the final bend to finish first at the summit of Mount Baldy.

The young UAE Team Emirates rider had been locked in a nip-and-tuck battle with Higuita over the final two miles of the gruelling 79.2-mile (127.5 kilometer) stage.

Higuita looked to be in control as the two riders navigated the final sequence of turns, but fatally went too wide on the last bend to allow Pogacar to dart past and take the line. George Bennett (Jumbo-Visma) finished third.

The win vaulted Pogacar into the overall lead in the general classification, giving him a 16-second lead.

Pogacar praised a team effort for helping secure a win that has left him on course to become the youngest Tour of California winner in history.

“Once again my team did really good job protecting me all day and leading me on, leading me onto the final climb and supporting me all the way that they could,” he said.

“I just did my best the last five kilometers … I was starting my sprint behind Higuita and he made mistake last corner and I went so much faster than him, so it feels really good,” he added.

Overnight yellow jersey holder Tejay van Garderen (EF Education First) was dropped with just under three miles to go as the effects of a virtual continuous climb through the San Gabriel Mountains took its toll on the peloton.

The Tour of California finishes on Saturday with the seventh and final stage, starting in Santa Clarita before a sprint finish in Pasadena near Los Angeles.