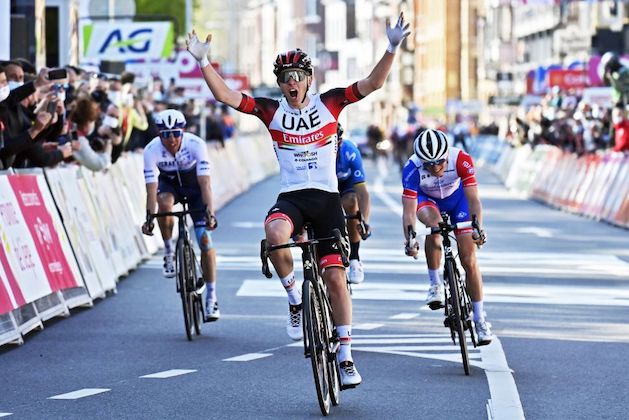 Pogacar moved past world champion Alaphilippe at the end of the 259-kilometer race, the Frenchman suffering again as he did last year when he was denied on the line by Primoz Roglic before being disqualified.

Pogacar and Alaphilippe were part of a leading group of five in the closing stages, with David Gaudu (Groupama–FDJ) taking the final spot on the podium.

The turning point of the race came on Cote de la Redoute with around 37 km remaining, as Tao Geoghegan Hart set the pace to break away from the peloton. Ineos continued to pile the pressure with Geoghegan Hart, Richard Carapaz and Adam Yates pulling clear with around 10 riders over the final climb.

The winning group, however, was formed at the top of the climb with Michael Woods (Israel Start-Up Nation) injecting the pace that was matched by Pogacar, Alaphilippe, Alejandro Valverde (Movistar) and Gaudu.

The quintet opened up a 30-second advantage with a kilometre to go before Pogacar went on to clinch the win from Alaphilippe by a whisker.

“To win here against those names is incredible,” Pogacar said. “In the sprint I knew that Alaphilippe was going longer and I stayed behind him. I was just lucky in the end it was a good wind for me because I was coming from behind and could come with speed. It’s unbelievable. I’m living the cycling dream.”