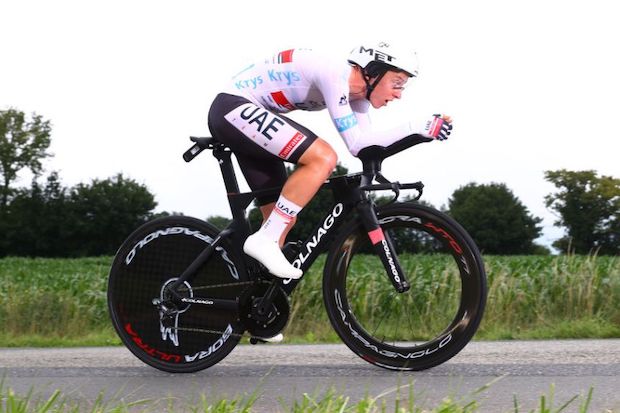 Tadej Pogacar emerged as the overwhelming Tour de France favourite after he destroyed the field by winning the fifth stage, a 27.2km individual time trial, on Wednesday.

You can rewatch STAGE 5 of 2021 Tour de France HERE

The defending champion clocked a best time of 32 minutes between Change and Laval to beat Stefan Kueng, the European champion, in the solo effort against the clock by 18 seconds.

“I didn’t think I was going to keep the jersey. It was a great day, I’m really happy,” said Van der Poel, who is expected to surrender his lead when the race reaches the mountains on Saturday.

Pogacar’s performance is a massive blow to his rivals for the title as 2018 champion Geraint Thomas ended up one minute 18 seconds behind and last year’s runner-up Primoz Roglic finished 44 seconds off the pace.

Pogacar is now second overall, eight seconds behind Van der Poel while Roglic is 10th, 1:40 down on his compatriot and Thomas 12th, a further six seconds behind.

Both Roglic and Thomas suffered nasty crashes in the opening days of racing and are now facing a huge challenge to beat Pogacar. Another top favourite, Richard Carapaz, is 9th, 1:36 behind Pogacar.

“For sure this time I’m already ahead and attacks will come everyday,” Pogacar, who believes he is in the same form as last year, told a news conference. “It’s going to be hard but that’s the way it is. One day you’re the attacker and another day you’re the one being attacked.”

The nature of the Tour, however, will keep Pogacar on his toes after several crashes on flat stages marred the first days of the event.

“We’ll see how I feel but I know there’s some tricky stages and even if tomorrow is easy on paper you never know what can happen,” he said. “So I will take it day by day.”