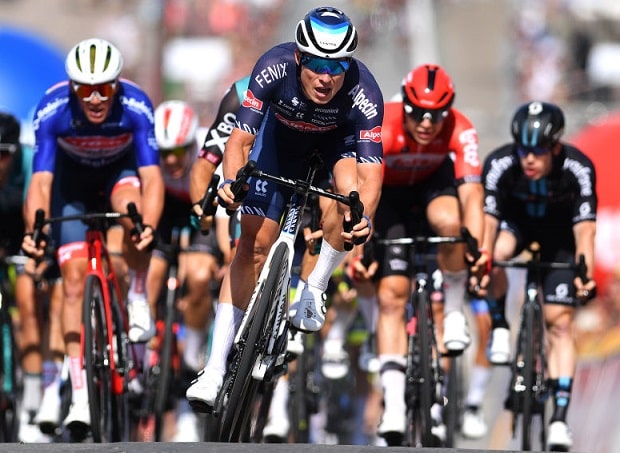 Jasper Philipsen won the sprint finish in Knokke-Heist to claim the second stage of Belgium Tour.

“It was a very hectic sprint. A lot of riders still had a lot of energy, so it was not easy to be in a good position,” Philipsen said. “This victory gives me courage with a view to the Tour de France. I’m in pretty good shape.”

“It’s nice to keep the leader’s jersey, although I might have preferred to ride in my own time trial suit. Tomorrow’s time trial is quite technical and also a good preparation for the Tour. I’m looking forward to it,” he said.

“We tried to control the race but a lot of guys used the bike paths and sidewalk. I think 90% follow the rules and don’t go there but others do. They always tell us they give out fines and disqualify them but then it almost never happens. I told them it is annoying. Theory should at least give them a time penalty.”

What a sprint to end the second stage in Knokke-Heist today🤩 Congrats @JasperPhilipsen!#BaloiseBelgiumTour pic.twitter.com/k76fLDT2Um