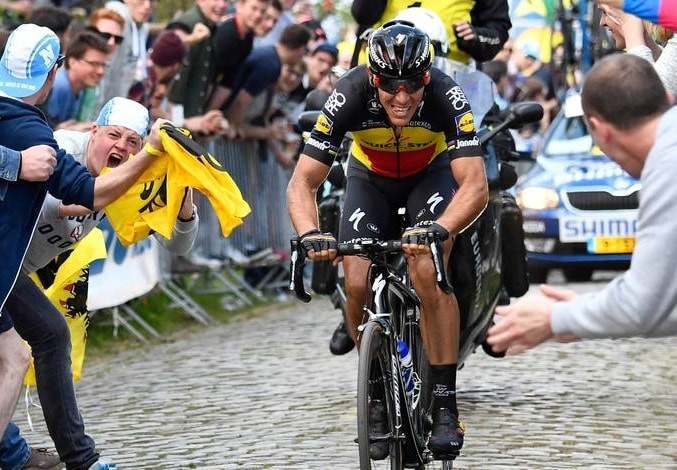 Philippe Gilbert will enjoy a well-deserved rest before returning to action later this month for the Ardennes classics.

Gilbert, who attacked with 56 kilometers to go in the Tour of Flanders, became the first Belgian Champion in nine years to conquer De Ronde and joined the elite club of riders who won cobbled and hilly Monuments over their career.

After his victory last Sunday, Gilbert has opted together with the Quick-Step Floors team to don’t ride the 115th edition of Paris-Roubaix, the season’s third Monument, so he can focus on the Ardennes Classics, scheduled in the second part of the month.

“Paris-Roubaix has a magnetic attraction on me, but I won’t be there this year”, said Philippe Gilbert. “I need to take a break, recover properly and then begin thinking of the Ardennes, where I’ll be part of a very strong team, together with Julian and Dan”

“Besides that, I’ve only raced Roubaix once, back in 2007, and for a race like that you need experience. Tom needs all the support he can get in his final attempt there, as a strong team is a very important factor in Paris-Roubaix, and I wish him all the best.”

“Immediately after his splendid Flanders win, the temptation of lining up Philippe at the start was big, especially as he too was thinking of this. But we sat down, thought this through and decided it’s better for him to rest a bit and then return to training for the Ardennes campaign, where his experience and power will be very helpful”, explained Patrick Lefevere, Quick-Step Floors’ CEO.