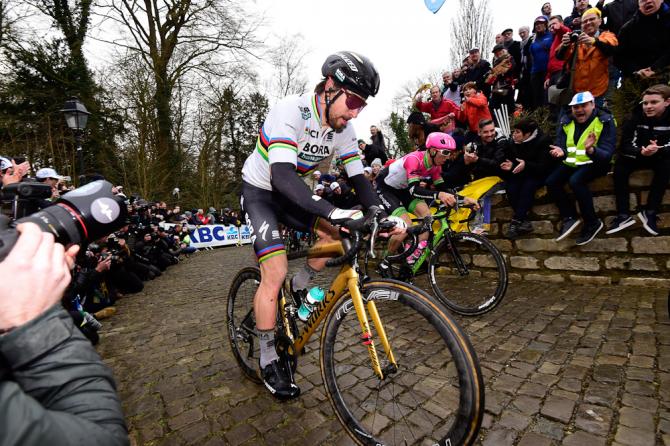 Peter Sagan pointed his finger at rival teams for their lack of cooperation during Niki Terpstra’s solo win at the Tour of Flanders and warned his rivals that Quick-Step Floors will continue to dominate the classics.

“I’m very happy about my performance, and also how the race finished,” Sagan said. “I couldn’t change a lot of things. I just could do my maximum and that’s the result.

“Look at E3 Harelbeke and here, Quick-Step controlled it all. They put all the teams into a spin. They have great riders, but they put us leaders in trouble because they open the race early and there aren’t helpers left to control the race.”

“I think the season will still continue and it’s hard to race in my position in the group. Also, if the other riders don’t wake up, it’s going to be like this,” Sagan continued. “Quick-Step is a great team because they have many riders at a good level. They can play multiple cards.

“Quick-Step did a beautiful race, I just think that the other teams didn’t respect the situation and collaborate. It’s not just me that they need to beat. We are in [a peloton of] 200. In that respect, they were mistaken, I believe. Like this, Quick-Step will go and win all the races.”

“I didn’t know what [Team Sky] wanted to do,” added Sagan. “If you take Michal Kwiatkowski as the leader in this race… I think that it’s a little mistaken to attack after the Koppenberg [with Dylan Van Baarle]. To open the race like that is too soon against Quick-Step.”