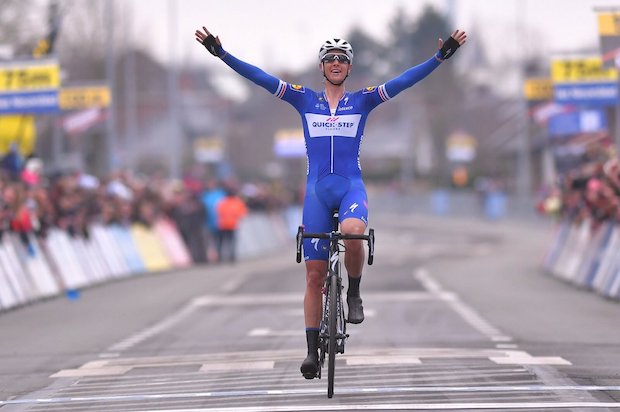 With their stellar cast of riders on show in Sunday’s Tour of Flanders, perhaps, inevitable that Quick-Step Floors team left the race with two riders on the podium.

Niki Terpstra leaped away from an elite group of contenders in the final 25 kilometers to win a cold edition of De Ronde. The Dutchman hit the finish line alone, 12 seconds ahead of Mads Pedersen (Trek-Segafredo) as Philipe Gilbert (Quick-Step Floors) took third place.

Smeared with dust on his face, he whizzed past three breakaway riders on the intimidating Oude Kwaremont, a 2.2-km cobbled climb at an average gradient of 4.2 percent, and never looked back.

A couple of hours after Olympic champion Anna van der Breggen won the women’s race after a solo breakaway, Terpstra used his tactical nous and his team’s strength to snatch an emphatic win after victories in Le Samyn and the E3-Harelbeke.

Dylan van Baarle (Team Sky), Sebastian Langeveld (EF Education First-Drapac) and Pedersen attacked with about 40 kilometers left but were caught by Terpstra at a key point of the race.

After a cobbled sector, Vincenzo Nibali sped away from the group of favorites but Terpstra jumped onto his wheel. He was, however, too powerful and went solo, bridging the gap to the leading trio at the foot of the Oude Kwaremont.

Terpstra was clearly the strongest and extended his lead in the final uphill cobbled sector, the Paterberg, and held off Pedersen and the group of favorites. 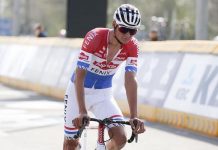