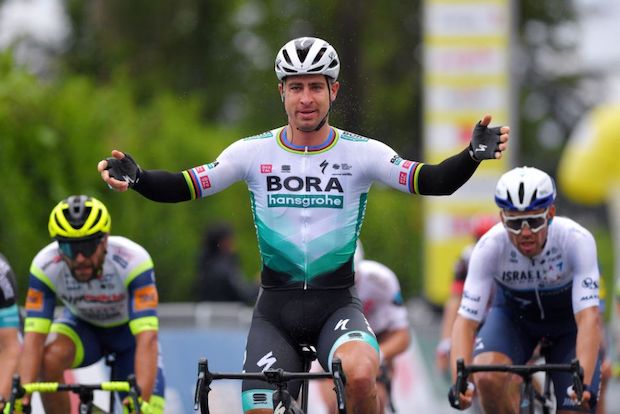 Peter Sagan won the bunch sprint finish in the first stage of the Tour de Romandie on Wednesday.

You can rewatch STAGE 1 from 2021 Tour de Romandie HERE

Rohan Dennis managed to keep hold of the overall lead he claimed in Tuesday’s prologue.

Sagan finished ahead of Sonny Colbrelli (Bahrain Victorious) and Patrick Bevin (Israel Start-Up Nation) after a 168-kilometre run between Aigle and Martigny.

This week’s race marks Sagan’s return to action following a break after the Tour of Flanders earlier this month. The 31-year-old contracted Covid-19 at the start of the year and struggled in the spring classics campaign.

“It feels good after three weeks without a race to come here and win,” said Sagan. “It was probably the only stage that suits me because the following ones will be very difficult.”

The 2015, 2016 and 2017 world champion earned his second win of the season after a six-man breakaway led by Dutch rider Thymen Arensman was caught coming into the final 20km. His other win of the campaign came during the Volta a Catalunya.