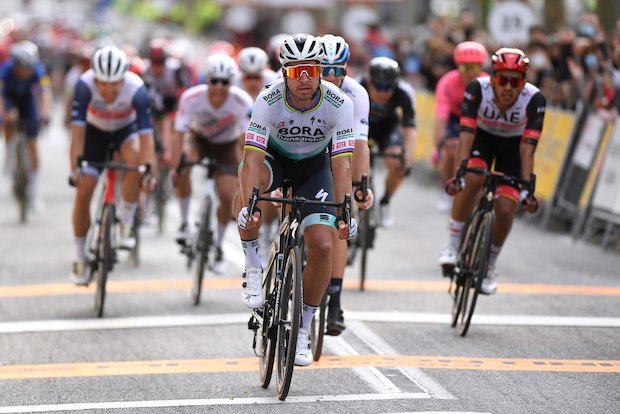 Positive for Covid-19 at the start of the year, the 2021 season had started with difficulty for Peter Sagan.

Coming to the Volta a Catalunya to rack up kilometers, the Slovak gained confidence by winning the 6th stage after a sprint which finished in Mataro. The Bora-hansgrohe rider outsprinted Daryl Impey and Sebastian Molano for his first success of the season.

It is also the first time that the former world champion has won a sprint since the 5th stage of the Tour de France 2019.

“I feel great. I was hoping for a win,” Sagan said after the race. “We made a plan to control the race at the start of the day, and I have to say thanks to all my teammates. They controlled the race from the start to the end. It was a very fast race today.”

“The race was hard from the start of the week,” Sagan said. “After Tirreno-Adriatico and Milano-Sanremo without a longer break, to come here, I’m a bit tired now, but I’m very happy for this victory. It’s a good start to the season, especially what passed in the two months before I came here. It was not easy, but now it all looks nice.”

Adam Yates (Ineos Grenadiers) finished safely in the bunch to retain the race lead with an advantage of 45 seconds over his teammate Richie Porte.