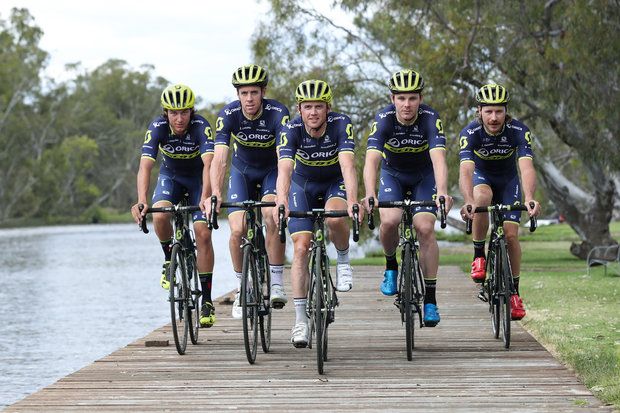 Michael Hepburn has given Orica-Scott a double on day two of the Mitchelton Bay Cycling Classic, backing up Amanda Spratt’s win with a solo victory of this own in the men’s race.

Hepburn looked ominous at the head of the peloton in the opening 15 minutes of racing but it was teammate Caleb Ewan, having bounced back from yesterday’s crash, who made the main move of the day alongside Robbie Hucker (VTWO Team).

With 15minutes left to ride and no support up front from Hucker, Orica-Scott made the call to bring the race back together in pursuit of victory. Former Australian champion Luke Durbridge softened the peloton up with attacks but it was Hepburn who went over the top of his efforts to force the winning move of four riders with three laps remaining.

As he crossed the finish line to receive two laps to go, Hepburn surprised his breakaway counterparts and went on solo to take the win.

“The plan today was quite open,” Hepburn said. “The opportunity was there for a few guys to go up the road and be aggressive and I’m thankful that I had the form and legs to go on with it.”

“I was away with (Ian) Bibby and (Jesse) Kerrison, so the leader’s jersey and Jesse, who is a pretty fast finisher, so I wanted to go to the line by myself.

“I threw a couple of attacks in and couldn’t get rid of them but then I decided to attack through the start/finish line, which you don’t normally do here, but just tried to catch them off guard and I was lucky I got a gap and could go on with it.”