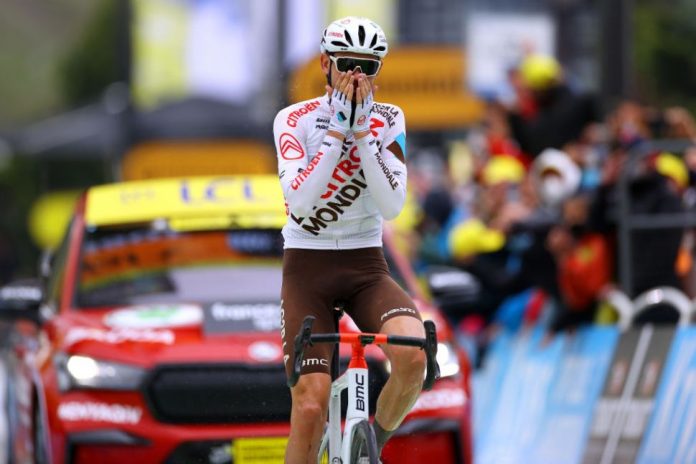 Tadej Pogacar kept a close eye on his challengers as he retained the overall leader’s yellow jersey in the Tour de France after the ninth stage, a 144.9km mountain trek from Cluses in the northern Alps on Sunday.

You can rewatch STAGE 9 of 2021 Tour de France HERE

Ben O’Connor of the AG2R-Citroen team won the stage from the breakaway, ahead of Mattia Cattaneo and Sonny Colbrelli.

Pogacar, who claimed the yellow jersey on Saturday, was in control all day and responded to a late attack by Richard Carapaz, his main rival for the general classification, in the final climb to the Alpine resort of Tignes to stay top of the rankings.

With his maiden Tour stage win, O’Connor climbed up to second in the overall standings, two minutes and one second off the pace, with Rigoberto Uran in third, 5min18s behind Pogacar.

After a crash-strewn start to the Tour, last year’s runner-up Primoz Roglic abandoned the race, failing to recover from injuries sustained in a third-stage tumble. An exhausted Mathieu van der Poel, who wore the yellow jersey during the week, also quit ahead of his bid to win Olympic gold in the mountain biking event.

Wout van Aert, who started the day in second place overall, cracked on the Col du Pre, halfway through the stage, and finished more than half an hour behind O’Connor as he dropped out of contention.

His Jumbo-Visma team, who had been lined up to help two-time Vuelta champion Roglic win the title, will now ride for Jonas Vingegaard, who is fourth overall and 5:32 behind Pogacar, one second ahead of Carapaz.

The 25-year-old O’Connor went solo with 17.5km to go and in the last 10km, Ineos Grenadiers upped the pace in the group of favourites to set up Carapaz’s attack.

Carapaz took off with four kilometres left, but the 2019 Giro d’Italia champion was countered by Pogacar, who eventually finished 32 seconds ahead of the Ecuadorian.

“I made a little attack in the end to keep things under control,” Pogacar said. “They (Ineos Grenadiers) made it a little bit harder but I had good legs to counter attack.

“Yesterday was one of the best days of my career and I was more in a survival mode today, although I was in a good shape.”

Arnaud Demare, who was aiming for wins in the Tour’s sprint finishes, ended the day outside the time limit meaning he is out of the race.