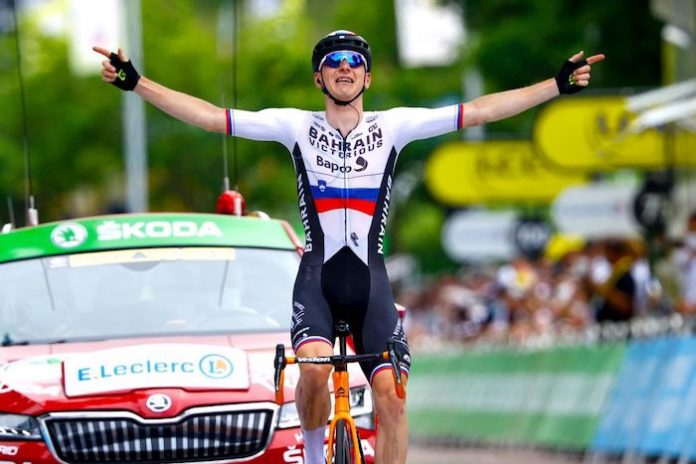 With its hilly profile, the 249-kilometer stage 7 from Vierzon to Le Creusot produced a Tour de France classic as Matej Mohoric earned his first stage win on the Tour following a long breakaway.

You can rewatch STAGE 7 of 2021 Tour de France HERE

Mohoric was part of a group that formed more than 200 kilometers before the finish line. He went solo in the finale, using a tough climb to drop his remaining breakaway companions and reach the finish line alone.

Mathieu van der Poel looked exhausted when he crossed 1 minute, 40 seconds behind but he kept the yellow jersey with a 30-second advantage over Van Aert,

“It was 250 kilometers full gas,” Van der Poel said. “It went really fast and we managed to break away with a really strong group, it was really hard. I went to the limit to keep this jersey, which is really special.”

Pogacar could not get into the breakaway and rode at the back with other top contenders after his UAE Team Emirates reacted too late and could not bridge the gap. Pogacar lost more than five minutes and dropped to fifth overall, 3:43 off the pace.

“We tried to close really fast … but they were pulling like crazy from the beginning” Pogacar said.

Despite big efforts deployed throughout the day by his teammates to limit the damage, Pogacar remained confident they will recover in time for Saturday’s first Alpine stage to Le Grand-Bornand.

“I know my team and I know they are strong,” he said.

The day’s biggest loser was Roglic, who crashed earlier in the race. Roglic struggled in the climb on Friday. He managed to get to the finish with a deficit exceeding nine minutes and his hopes of winning the three-week race were effectively over, barring an incredible comeback.

“The stage I won in the Vuelta was also the longest stage in the race that year, and the same goes for the stage in the Giro,” he said. “I’m good in these super long, not so brutal efforts. I can keep up with a good pace for a very long time.”