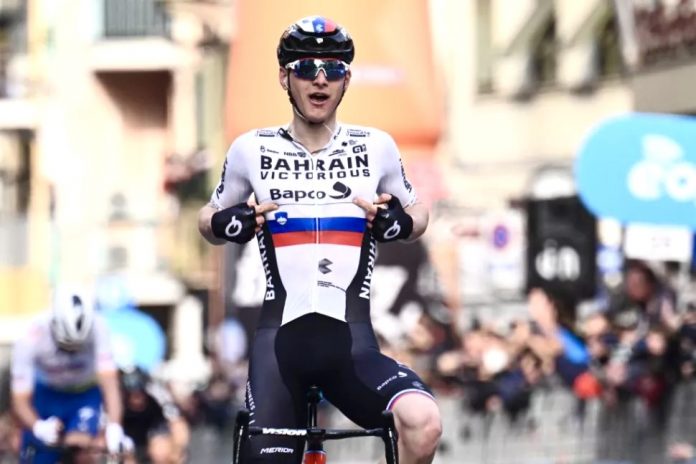 Matej Mohoric stunned the pre-race favourites to win the Milano-Sanremo following a perfect attack on the last descent on Saturday.

The Bahrain Victorious rider was still in contention after Tadej Pogacar accelerated on the Poggio climb and he surged ahead at the beginning of the downhill section leading to the Via Roma.

Mohoric, who won two Tour de France stages last year, rode at breakneck speed and took all the risks, almost crashing twice, but he looked back only some 50 metres from the line, when he had made sure he would not be caught.

Anthony Turgis came home second after jumping away from the chasing pack, while Mathieu van der Poel, in his first road race of the season, took third place.

“I worked all winter for this, I knew it could be my day. I took risks in the descent,” said Mohoric. “I knew I could make a big difference in the descent.”

“The team came up with the idea of using a dropper post because this race suits me pretty well and it has a descent at the end.

His fellow Slovenian Pogacar, who attacked relentlessly on the Poggio, ended up fifth while Wout van Aert, the other top favourite, was too passive and finished eighth.