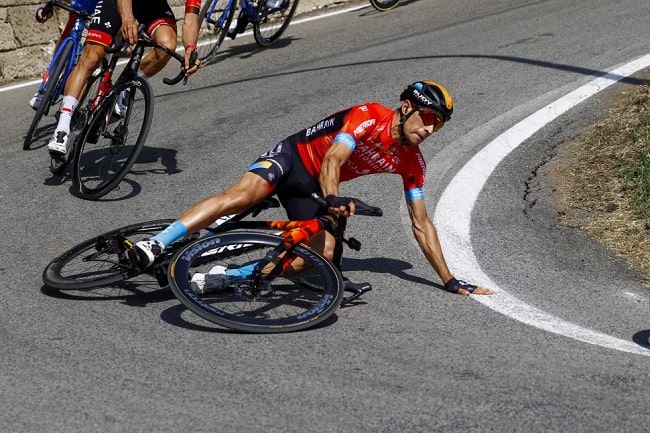 Mikel Landa moved up six places in the Giro d’Italia general classification to seventh overall, putting on an impressive display on Blockhaus, where he crossed the line in 4th place.

The 191km stage and the hardest of the Giro so far had over 5,000 vertical meters and helped shape the GC rankings with a selection of seven riders making it to the line in the first group.

Despite the result, it wasn’t plain sailing for Bahrain Victorious, with Bilbao, Buitrago and Landa all crashing during the stage. However, all riders could continue without injury and help Landa onto the final climb, where he showed his strength and followed the attacks of fellow GC favourites Richard Carapaz (Ineos) and Romain Bardet(DSM).

“In the end, the stage was good for us, despite some crashes, not only for me but also for Pello and Buitrago. But I was in the front with the best of the day, which is a good signal. We are still there, and everything is clearer, and we see which riders are stronger. We’ve got more stages to go through, and we will see day by day,” said Landa.

Pello Bilbao also managed to battle the bruises following his crash and stay in the top ten in GC:” We knew that today was a key stage and Ineos would go hard to make big gaps in the overall. We wanted to be in the game, but a lot of problems for us in the second climb of the day. I had a crash after Yates had a puncture and then, due to that, made a movement which made me and Buitrago crash quite hard. We then also had Mikel crashing going downhill, so we had a few problems to fix during the day.

“So despite this, we can be happy with the day and Mikel arriving in the first group. I wanted to be with him for longer, but I wasn’t that useful and just kept my rhythm. Luckily we can fix everything over the rest day with the support of the best masseurs and osteopaths to bring us back to 100%.”