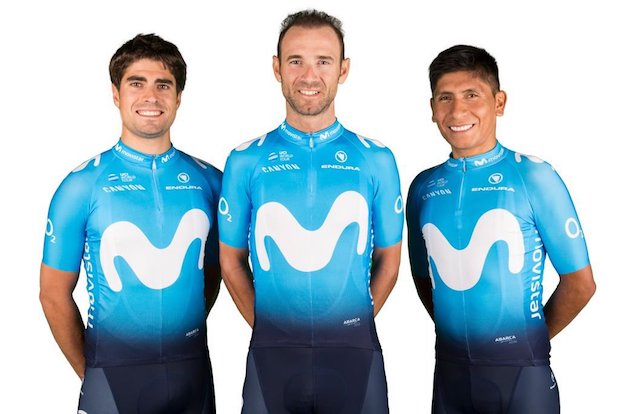 Movistar has announced its shortlist for the 2018 Tour de France and the Spanish team will be led by Alejandro Valverde, Mikel Landa and Nairo Quintana.

Movistar team manager Eusebio Unzue thinks having three leaders in France will work, rather than spelling confusion and infighting.

“For now, it is mission accomplished, because our initial goal was to get to the Tour with all three riders, in the best condition possible,” said Eusebio Unzue. “Given the uncertainty about Froome’s participation, right now as rivals, we have to consider anybody who has won a Grand Tour who’s in the line-up, which is Dumoulin and Nibali, apart from Alejandro and Nairo, of course. Then there are riders like Porte, Geraint Thomas, Bardet, who are maybe not quite as experienced, but they all have options. So too, does Primoz Roglic.”

“We can’t ignore Nairo’s consistency, he’s always been there on the podiums of the Grand Tours.”

“Mikel is someone who gives us huge grounds for feeling optimistic, and Alejandro – who needs no introduction – can be up there in a key moment of all kinds, particularly in the last fortnight. If we get some good luck, too, then we’ve got every reason to be optimistic.”

“We go to the Tour with big hopes to shine and together with Mikel, we’re moving in the right direction. It’s a very complicated Tour, but we’ll try to do something,” commented Quintana.

“It’s not just the three of us; with the five team-mates we’ll have at the start with us, the lineup will be one to fear,” added Landa.