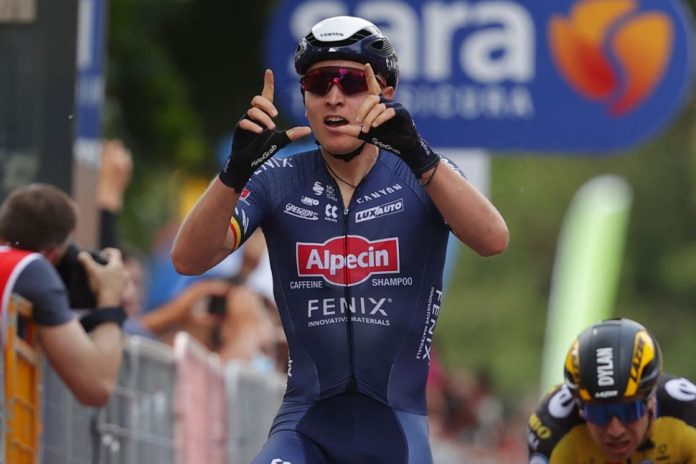 Tim Merlier won a sprint finish to claims the second stage of the Giro d’Italia on Sunday with Filippo Ganna holding the leader’s pink jersey.

You can rewatch STAGE 2 of 2021 Giro d’Italia HERE

The Alpecin-Fenix sprinter finished ahead of two Italians, European champion Giacomo Nizzolo and Elia Viviani, to claim his fourth win of the season.

“I’m really happy, I’m really proud of it,” he said. “I was only thinking we need to be faster, faster, faster, Alex [Krieger] gave me a great aeadout. I went from far – 250m – it seemed a bit far, but it was a great victory.”

Dylan Groenewegen finished fourth on his return after a nine-month ban for his part in a crash that left compatriot Fabio Jakobsen with serious injuries at last year’s Tour of Poland.

Opening time-trial stage winner Ganna holds the overall race lead after the 179-kilometre run between Stupinigi near Turin to Novara in Piedmont.

Monday’s 190km third stage between Biella and Canale includes three climbs in the second half of the race including one 15km from the finishing line.