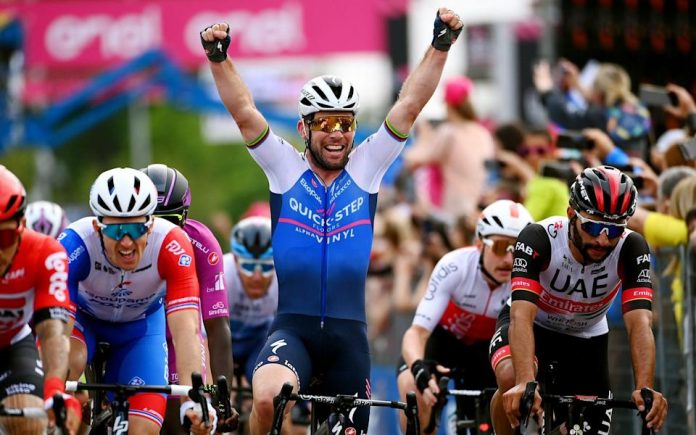 Mark Cavendish marked his return to the Giro d’Italia with a commanding sprint on stage three of the race, a 201km-ride from Kaposvar to Balatonfured as Mathieu van der Poel retained the overall lead.

Cavendish timed his move to perfection as he was given the perfect lead-out by Michael Morkov with just under 300 metres remaining and he comfortably out-sprinted the peloton with an impressive effort.

The Manx rider held his effort all the way to the finish line and saw off Arnaud Demare and Fernando Gaviria to claim the 16th Giro d’Italia stage win of his career, nine years after his last.

“I’m not very young anymore, I’m usually in gear after four to five days, but at the end of the day I’m still the old Cavendish,” he added. “I wanted to do good in the first sprint… My team mates rode incredibly well.

“We had a set-up today and they delivered. I had to go long at 300 metres to go and I’m just happy I could hang on that long for the win.”

Van der Poel, serving as the lead-out man for Alpecin-Fenix teammate Jakub Mareczko, finished 17th and will wear the Maglia Rosa when the race moves to Italy for stage 4 in Italy on Tuesday.