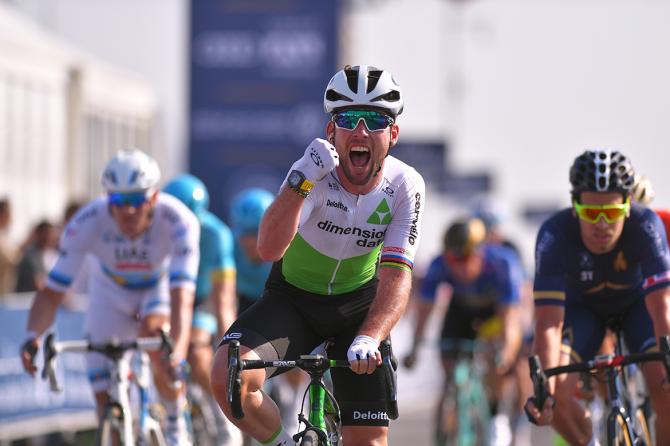 Mark Cavendish (Dimension Data) sprinted to victory on the third stage of the Dubai Tour, outpacing Nacer Bouhanni (Cofidis) and Marcel Kittel (Katusha-Alpecin) to seal his first win of 2018.

Stage 3 of the Dubai Tour was yet again another sprint fest, with the fastest riders in the world going full tilt for the line in Fujairah. Mark Cavendish proved he was the fastest of them all, with an impressive acceleration over the last 200 meters of the 180km stage, securing the stage victory for our African Team.

It was a steady build up to the sprint finale once again, with a 4-rider early break going clear by 7-minutes. Some blustery wind conditions resulted in a bit of action from the peloton, the main group splitting in two. This increased tempo saw the escapees caught in no time. As the wind died down though, so did the overall pace of the race and the peloton regrouped for the final 60km.

In the final sprint, Cavendish craftily moved up onto the wheel of Sonny Colbrelli (Bahrain-Merida), waited for the right moment, and launched his sprint to come over the top of the Italian and his countryman, Elia Viviani, in the final 200 meters of the stage. Bouhanni and Kittel could only follow in Cavendish’s wake, as he took his first win of the 2018 season.

“I am really happy with the win and with how the team rode today. We had a plan to be in the front at the roundabout at 3km to go, that was our first finish-line. That was good, we had a full African leadout into it, the lads were wicked. It was Bernie, Renshaw and I in the last 3km before I had to do my own thing in the final. I was lucky that Nacer let me in, in the last couple of hundred meters. After yesterday I realised I can’t really match Elia in a drag race, so I had to leave it late and wait until he passed his peak in the sprint. I then used the slingshot to pass. I am happy with that and with how the Dubai Tour has gone. I’m just a bit disappointed now that I sat up in the sprint yesterday. I let my team down because technically I could’ve been in the leader’s jersey now if I finished second and got the time bonus. I can only apologize to my team for that and make up for it on the other days going forward”, said Cavendish.