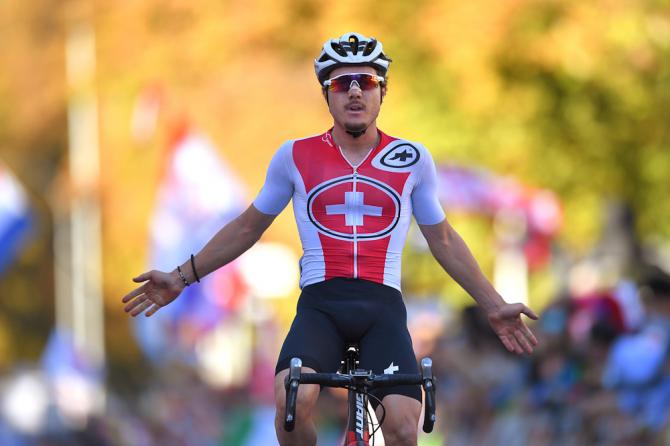 Marc Hirschi (Switzerland) caught his rivals napping on the final descent as he charged away to win the U23 road race title at the World Championships in Innsbruck.

Hirschi, Bjorg Lambrecht (Belgium), and Jaakko Hanninen (Finland) moved clear on the final ascent of the Igls’ climb and the Swiss snuck away on the descent with 10 kilometres remaining to become world champion. Lambrecht finished second and Hanninen took the bronze medal.

“It’s amazing, the team did such a great job,” Hirschi said. “From the beginning, we were always in the right group, we were playing a bit with the others. It’s amazing, it’s absolutely crazy.”

“I think the crucial point was our attack on the descent of the second lap, because we were then four guys on the front,” Hirschi said. “It wasn’t planned like this, because we thought the descent would be too easy to make a gap. We were four guys in the group. Patrick went with the first attack, Gino was in the second attack. I was in the peloton and I knew I could maybe win in the sprint from a small group. The plan worked perfectly, and it was amazing.”