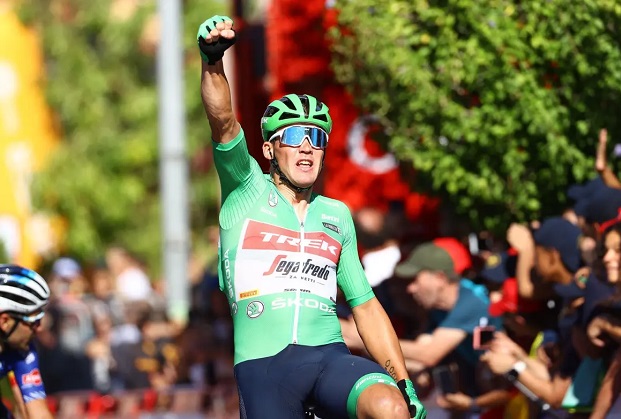 Remco Evenepoel had no trouble protecting his lead of the Vuelta on the 19th stage on Friday with only one day of competitive racing left.

Evenepoel maintained his two-minute lead over Enric Mas over the course of the short and hilly ride that finished in a long, flat arrival to the finish line.

Mads Pedersen beat Fred Wright to claim the 138-kilometer ride to and from Talavera de la Reina in central Spain. It was the Dane’s third win at the Vuelta.

“Three wins is way more than what we came here for. That’s of course super nice,” Pedersen said. “Tomorrow we just have to finish the day and then we will see how it goes in Madrid. But no matter what, I think we can be happy with these three weeks in Spain.”

Mas’ last chance to overtake Evenepoel will be on Saturday’s mountainous stage before the largely ceremonial arrival to Madrid on Sunday when tradition mandates there are no attempts to overtake the leader.

“Tomorrow is the last day, and the biggest fear today was to have a crash or to be unlucky,” Evenepoel said. “So that’s why we were trying to stay in front with the guys. Then, the last one, three kilometers was a straight line, so then I could slow a bit down and just follow the wheels.”

The 20th stage is a 181-kilometer ride from Moralzarzal to Puerto de Navacerrada that includes three category-one climbs and a summit finish.

Evenepoel has been leading the race since the sixth stage in the longest run at the top for a Belgian at a Grand Tour race since 1978 when Johan De Muynck won the Giro d’Italia. That was the last victory for Belgium in a three-week event.