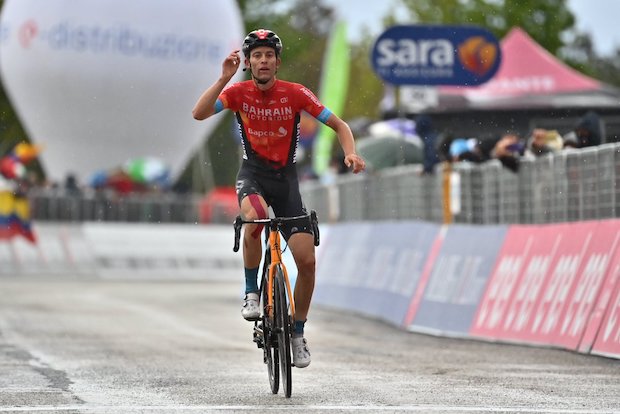 Gino Mader claimed his maiden grand tour victory when he prevailed at the end of a long-range breakaway on the sixth stage of the Giro as Egan Bernal underlined his title credentials again on Thursday.

You can rewatch STAGE 6 of 2021 Giro d’Italia HERE

A day after his Bahrain Victorious leader Mikel Landa crashed out of the race, Mader had just enough left in the tank after 162 km in the rain from Grotte di Frasassi to give his team something to cheer.

“As soon as I was alone and the last survivor of the breakaway, the only thing I could think of was Paris-Nice. There was that sharp doubt in my head that the same thing was going to happen. With 100 meters to go, I could finally celebrate and enjoy the moment.” said Mader.

Charging up behind him was Egan Bernal, after the 2019 Tour de France champion had dropped most of the pre-race favourites with two kilometres to go on the final climb to San Giacomo.

Attila Valter limited the damage in the climb to take the overall leader’s Maglia Rosa from Alessandro De Marchi, who was caught at the wrong end of a split in the peloton shortly after the stage’s midway point.

Valter leads Evenepoel by 11 seconds. Bernal, who had already impressed in the first summit finish on Tuesday, is third 16 seconds off the pace, while Simon Yates lags 49 seconds adrift after failing to follow the Colombian’s attack.