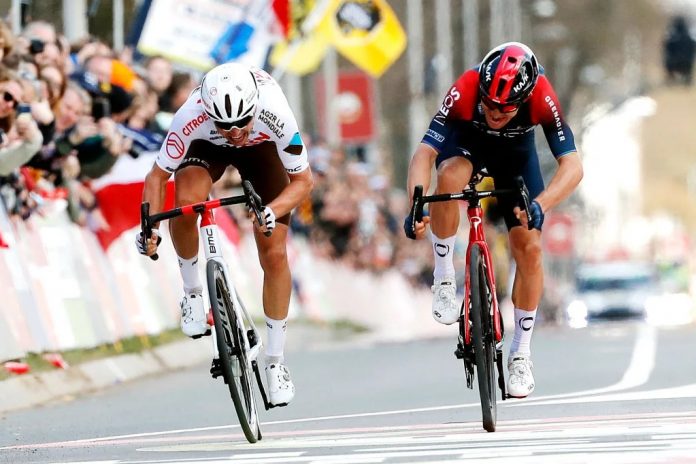 Michal Kwiatkowski won the Amstel Gold Race on Sunday for the second time in his career after being judged the winner following a thrilling photo finish with Benoit Cosnefroy.

Kwiatkowski’s strong finish to the line snatched victory to add to his success in the 2015 edition of the Dutch one-day classic.

“It was a rollercoaster, it was very emotional,” he said. “He thought he won. What can I say? It teaches me you have to be patient. It was a similar situation in Sanremo, and it was sad for me when I heard I was second, and then the happiness came. It was great, it was euphoria.”

It was a frustrating finish for Cosnefroy who organisers had initially declared winner of the 254km race in the hills of South Limburg. Last year’s race was also a photo finish with Wout van Aert pipping Tom Pidcock.

The race sprung to life in Keutenberg, 35km from the finish line, where the Ineos team led by Kwiatkowski and Pidcock led a group of eleven riders.

Kwiatkowski broke away with 22km to go, followed a few minutes later by Cosnefroy, who joined him 19km from the finish, on the penultimate ascent.

Behind, Tiejs Benoot came out on the counter-attack in the final sprint to finish third ahead of race favourite Mathieu van der Poel.