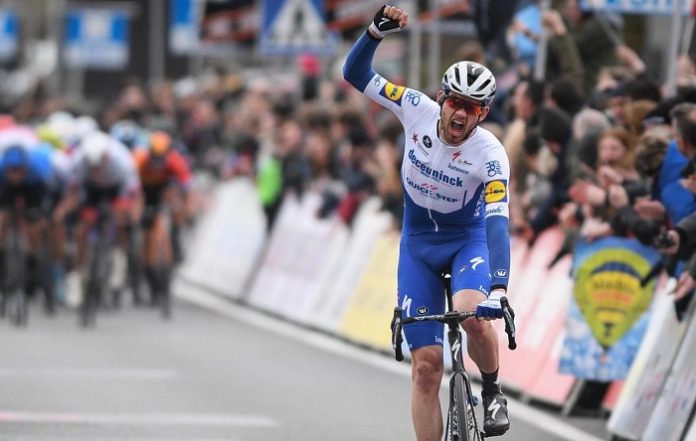 Kasper Asgreen won the Kuurne-Brussels-Kuurne on Sunday with an impressive solo effort.

The Deceuninck-Quick-Step rider used his time trial skills to hold off the chasing peloton after starting the final 10 kilometers with a small 20-second lead.

After bridging a gap with a group riding at the front, Asgreen pulled away with Roy Jans and Boris Vallee then dropped his rivals to take solo lead of the race. Giacomo Nizzolo beat Alexander Kristoff in a sprint to finish second.

“It was so hard,” Asgreen said. “I had to drop the Alpecin rider in the crosswinds because he was not pulling but obviously he had [Tim] Merlier in the group behind so of course he should not pull but of course it was a bit annoying so I had to get rid of him. That effort was really hard and afterwards I was really doubting if I could make it to the line. Then, I didn’t know how fast [Vallée] is in a sprint, so I preferred to arrive alone.”

The race was marred by the exclusion of Gianni Moscon, who was disqualified for throwing a bike at another rider after he was caught in a big pile up with 65 kilometers left. Two year ago, the Team Ineos rider was excluded from the Tour de France for hitting another rider in the face.

Bennett, Almeida to leave Quick-Step at the end of the season