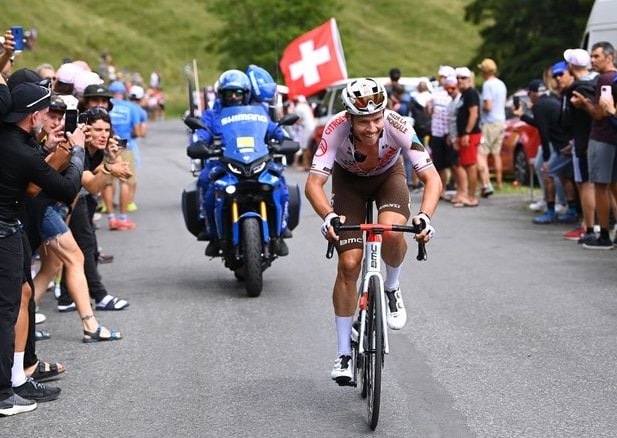 Bob Jungels won the ninth stage of the Tour de France at the end of a long solo mountain raid on Sunday after COVID-19 almost prevented the Luxemburg rider from starting the race last week.

You can rewatch STAGE 9 HERE

The AG2R-Citroen rider tested positive on the eve of the start in Copenhagen last Thursday but was cleared to take part after a panel of doctors ruled that his viral load was low enough for him to ride.

“I had a test on the Thursday morning. But with the result you could see that I could start the race on Friday. It was very very close I believe,” said Jungels, the first rider from Luxemburg to win on the Tour since Andy Schleck claimed victory at the Galibier in 2011. “Luckily I made it.”

Jungels prevailed from the day’s breakaway in searing heat in the Alps after resisting a fierce chase by Thibaut Pinot, who surrendered in the final kilometres and finished fourth after 192.9km from Aigle, Switzerland.

Tadej Pogacar retained the overall leader’s yellow jersey after spending a quiet day in the bunch, crossing the line just ahead of Jonas Vingegaard after a short sprint to the line.

Geraint Thomas, third overall, could not follow and lost three seconds, now lagging 1:17 off the pace.

“If there’s a chance to take some seconds I’ll take them,” said Pogacar.