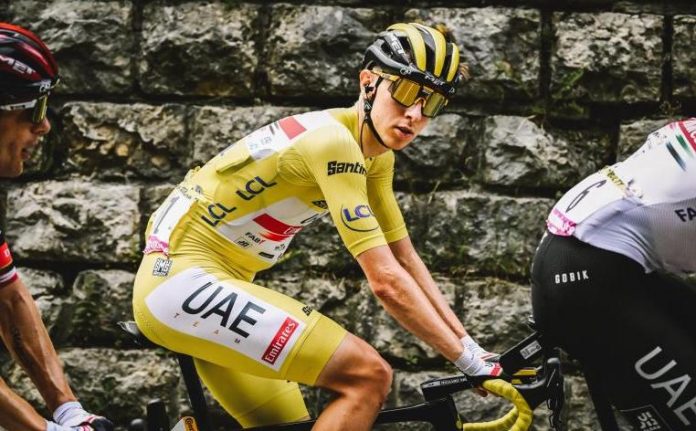 The Tour de France peloton were given the green light to advance into the Alps as the latest mass batch of rider covid tests were all reported negative on Monday.

The 165 remaining riders can now enjoy rest day Monday and focus on the fearsome mountains ahead of them.

The news came after three riders pulled out of the race over the past two stages as the race entered its often decisive slog through the Alpine mountains.

“It’s a big scare, the pandemic is still there with us,” the Slovenian race leader said after winning stage eight.

UAE revealed that riders each had not only their own room, but their own masseur.

Sunday’s ninth stage was preceded by the news that Guillaume Martin had been forced to withdraw too.

“It’s such a shame,” said the then 13th placed rider. “I just have a slight sore throat.”

But Martin had been deemed infectious, in covid speak, emitting a strong viral charge.

“The decision was taken in a collegial manner by the concerned team doctor, the Covid-19 doctor for the event and the UCI Medical Director, on the basis of the available clinical elements,” a UCI statement said.

A collegial medical decision can also clear a rider to continue, in the case of a low viral charge. This was the case of stage nine winner Bob Jungels, of the AG2R team who withdrew Geoffrey Bouchard on Saturday.

Bob Jungels tested positive before the Grand Depart in Copenhagen but was cleared to ride.

“I’m not a doctor. It’s not for me to comment on this decision, but I didn’t feel ill,” said Jungels after doctors deemed him unlikely to infect others.

“Cycling is exemplary with its covid testing,” a member of the AG2R entourage said, suggesting cycling took its testing much more seriously than some other sports.