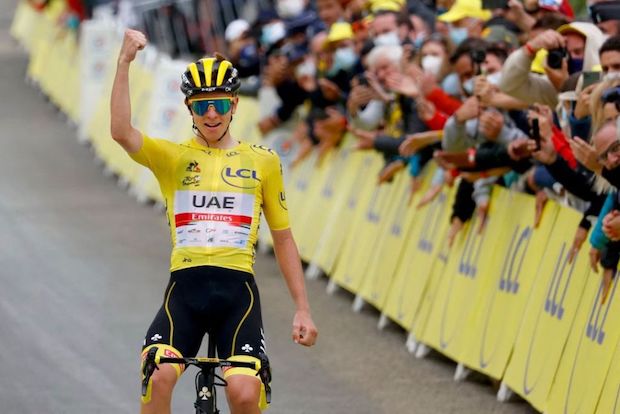 An early crash in the peloton at a crucial point sealed the race fate. With 3 riders only managing to get away, there would be many team unhappy and the chase would be on. From this point, it pointed towards an expected win for Wout Van Aert.

The stage starts Aigle where the UCI headquaters is located and visits the French speaking area of Switzerland. The first flat km is exposed to head winds which will not be to the advantage of break-away wannabe.

The 4th Categorised Cote de Belle Vue (4.3km at 4 %) is the perfect launch pad for the break away of the day. There will be a lot of riders hopeful to be in it but the presence of any serious contender to the yellow or green jersey will again compromise their chances.

The altitude gain continues up to the intermediate sprint where Magnus Cort and Michael Matthews will be hoping to pull something on Wout Van Aert.

The stage and the week ends with the climb of the Pas de Morgins ( 1st category – 15.4km at 6.1%). It is definitely not the hardest climb we will see in this Tour but it is an opportunity for some riders to try to push Pogacar to his limits.

After topping the last categorised climb of they day, the guys will descend into France at full throttle before a final 4 km climb to Chatel’s Les Portes du Soleil (Gates of the Sun), where the peloton will be taking a well deserved rest day tomorrow.

After some high paced and very difficult race days, it seems more than suitable that a break away will be allowed to have their day. However there are a lot of teams with riders having aspirations for stage win and if they are not satisfied with the break away, the chase will go on. Also, team Ineos Grenadiers and Team Jumbo Visma will be sensing for a chance to have a crack at Pogacar and witnessing some cracks in Team UAE Emirates.

A real champion that has been riding through pain the past days. Nobody deserves a win more than him. At more than 3 minutes down, he needs to have a go in the early part of the Pas de Morgins or even earlier at the Col De La Croix

While questions are being raised about his team , he remains the best rider in this race and will ask his teammates to keep  high pace to keep all his opponents in check. If he is with in 3 minutes of the break-away at the foot of the Pas de Morgins, it will be nearly impossible to deny him a 3rd stage win.

The most likely man who can upset Pogacar. He nearly did it at the Super Planche de Belles Filles. Today, the longer but less steep climb will need different attributes that could suit him. Also,  his duo with Primoz Roglic who could force Pogacar to his limit.

He came to the tour with the ambition of stage win and at best KOM jersey. However, he should be more than satisfied with his current form and GC placings.  Good descender, he could take a win if he knows when to place his attacks.

He looked very impressive 2 days ago and it only took a raging move form Jonas Vingegaard to deny him of victory. He is a super talented rider that can push himself beyond his limit.

The finish does not look like a typical Bauke Mollema’s stage but he can get into the break away, he will be a force to be reckon with.