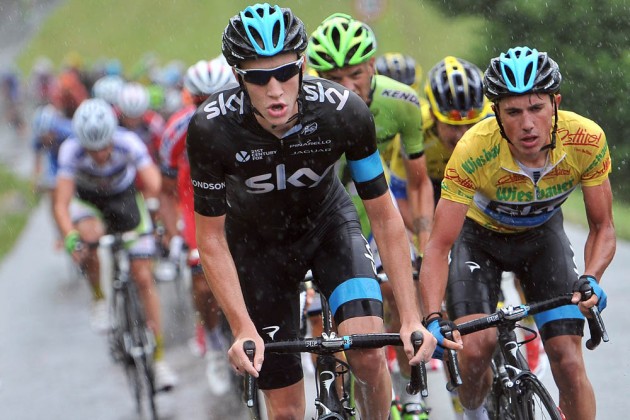 Joshua Edmondson has admitted to breaking ‘no-needle’ rules by secretly injecting himself with vitamins while riding for Team Sky.

When Edmondson signed a two-year deal with Team Sky in 2013, he was a 20-year-old climber with a spring in his step and a clear path to the top.

At 18, the Leeds-born rider finished fourth in the 2010 Junior World Championship road race but his real breakthrough came in 2012, when he finished 10th at the Giro della Valle d’Aosta, a tough week-long race won by a 22-year-old Fabio Aru, a future Grand Tour winner.

“In 2014 I was under a lot of pressure, not just from the team but from myself,” Edmondson told the BBC. “You want to renew your contract for one thing, and for me the bigger thing was not letting anyone down – this team had given me a chance by signing me and a bigger chance by letting me go to a Grand Tour [the Vuelta a Espana].

“I think it was just before the Tour of Austria, I went to Italy to buy the vitamins that I was going to later inject. I brought them all back to Nice. I bought butterfly clips, the syringes, the carnitine [a supplement], folic acid, ‘TAD’ [a supplement], damiana compositum, and [vitamin] B12, and I’d just inject that two or three times a week maybe. Especially when I wanted to lose weight, I’d inject the carnitine more often because it was very effective.”

Edmondson was eventually caught out in his attempts to close the gap and admitted to bursting into tears as Steve Peters, then Team Sky’s head of medicine, told him that his vitamin exploits had been discovered.

“This was my way of closing the gap a little without doping,” Edmondson said. “Some people think there is a grey area, and that’s why there is a no-needle policy, but people across sport have been injecting vitamins for years and it is an alternative to doping.

“It’s not the same – if you were doping, you are getting massive gains. This is just freshening what you do naturally.”

“I got back from that and noticed all the vitamins which had been hidden in my room were on top of this chest of drawers – and I realised I’d been caught out,” added Edmondson. “At that point I was panic-stricken. I’d never known anything like it. You just go weak and I had no idea what to do.

“He (Dr Steve Peters) said ‘there’s been an incident’ and I broke down. I was crying, I was in shock. And he said, ‘somebody has sent us some photos of this intravenous equipment and the vitamins’.”

“I was just really worried how it would look and it was a naive thing to do because I know now that if I’d gone to someone, like Dr Freeman or Wiggo [Bradley Wiggins] or anyone really, someone I’d trusted, they would have helped me, and there’d have been no problem.

“It just seemed at the time that if I’d gone to them and told them, ‘I’m having this too much, I might be abusing it a little’, I didn’t think they would help me, just see it as a negative thing.”

On the subject of Edmondson’s reluctance to discuss his problems, Team Sky said in a statement: “We are confident we have mechanisms in place which encourage a rider to bring any issues they may be experiencing to staff in confidence.

“We are also satisfied that staff are equipped and able to raise any concerns they may have regarding a rider’s welfare, and for the team to offer support.”