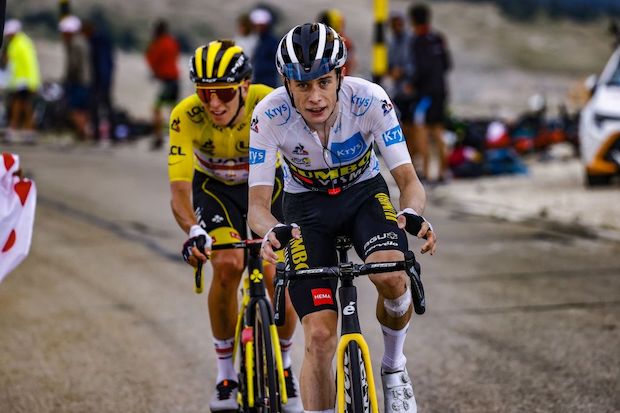 Jonas Vingegaard was delighted with his performance in the 17th stage of the Tour de France.

The Dane from Jumbo-Visma managed to stay with Tadej Pogacar and Richard Carapaz on the final climb of the Col du Portet, moving him to second place in the standings.

“What a day! Second in the stage and second in the GC. I am very happy with that,” Vingegaard said afterwards.

The young rider was one of the riders who was able to keep up with Pogacar’s acceleration 8 kilometers from the finish and after Rigoberto Uran was dropped, he was left at the front along with Pogacar and Carapaz.

“I think Pogacar, Carapaz and I were at same level today. Carapaz didn’t want to cooperate. When he accelerated in the last kilometer, I had a bit of a hard time following. But luckily I was strong enough to come back and beat him in the sprint.”

“I don’t think I could have beat Pogacar. He is very strong and is in the lead in the GC for a reason. But I don’t regret my efforts. Hopefully I can survive tomorrow and then it looks good to finish on the podium,” said Vingegaard.