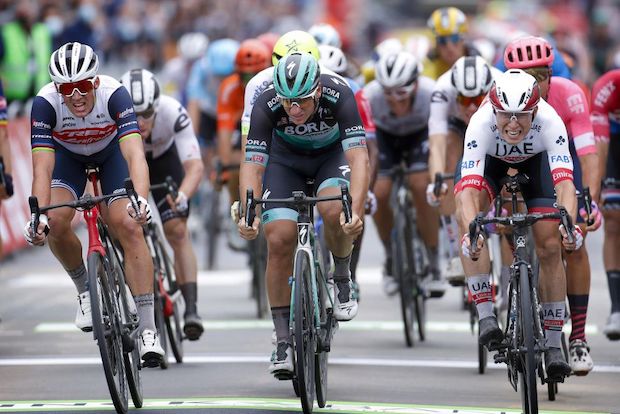 Jasper Philipsen beat Mads Pedersen and Pascal Ackermann in a sprint finish to claim stage 1 of the BinckBank Tour.

With 4.5km to go a big crash in the peloton led to a huge pile-up. A number of riders were knocked off their bikes and several were left nursing injuries after a touch of wheels.

Pascal Ackermann launched his sprint too early and Philipsen fired from a long way back to weave his way past to take his fourth career victory.

“It was quite easy, a two guy break so it was quite relaxed,” Philipsen said. “Everybody knew it would be a bunch sprint today. A lot of team had interest in that, then it was quite hectic in the end while everybody was still fresh.

“I’m happy I could stay out of trouble and that I could finish it off in the first stage.”