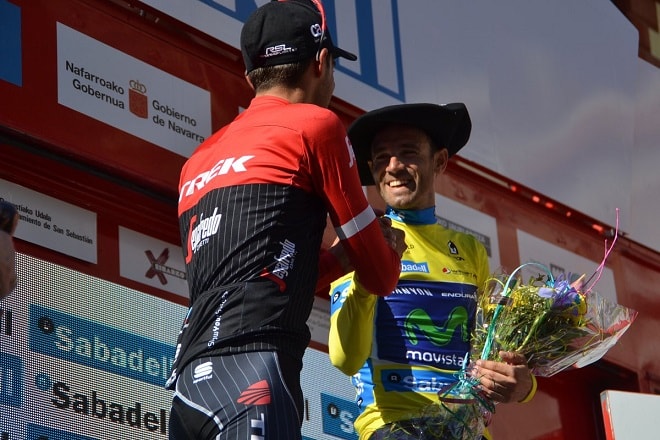 Primož Roglič (LottoNL-Jumbo) won the 27.7km individual time trial on the final stage of Tour of the Basque Country in Eibar, on Saturday.

Alejandro Valverde (Movistar Team) was finally able to cross out the Vuelta al País Vasco from his list of big victories still missing in his palmarès, fifteen long years after debuting in the race as a neo-pro in 2002.

The Movistar rider got hold at last of the ‘txapela’ hat awarded to the ‘Itzulia’ overall victor following a breathtaking individual time trial in Eibar (27km), over a course very difficult from a strategical point of view -a climb right from the start ramp, Karabieta, 7km long, followed by a fast descent, where the Spaniard exceeded 100kph; lots of ups and downs combined with long straights in the final 15km.

Alberto Contador put a 15″ on Valverde after the ascent, a serious gap which Valverde started making up with a crazy descent. The Spanish rider crossed the intermediate split (12km) as 2nd within all participants, 9″ behind Contador, and started to really turn things around into the slope of Soraluze (21km). Valverde, tied with Izagirre at that point -the Basque eventually 3rd overall- and 6″ behind Contador, managed his energy to perfection to strike once and for good: 6″ over Izagirre and 20″ on Contador through the last six kilometers were his decisive comeback, short only 9″ to the stage win by Primoz Roglic.

“Man, it was hard! I really wanted to win this Itzulia. I have been on the verge of success so many years, always came close without a win – fortunately, it seems like I’m on a good streak this season, and claiming overall honours at last makes for a very special success. Having no pressure before this race was possible thanks to that excellent start to 2017. It was a different País Vasco from previous editions, with lighter routes in the beginning – always demanding but not to much – and, at the end and as in every edition, it came down to the final TT. That’s where we had to give everything for the win”, said Valverde.