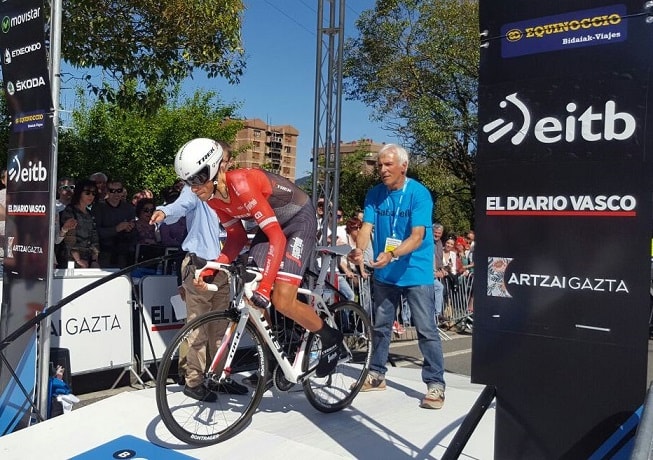 Alberto Contador pulled everything he had out of his hat but could not top Alejandro Valverde (Movistar) from winning the Vuelta al Pais Vasco, as he settled for second place.

“I’m satisfied because it’s been a race in which I’ve been through everything: falls, punctures, breakdowns, the fall of Samu (Sanchez) in front of me and, to top it all, today the radio did not work almost from the start,” said Contador. “Not much luck has accompanied me, but if that changes for me in another race, which is what I want, I’m okay with it happening here.”

“We decided to start with the road bike because I crashed three days ago and I’m sore, and it was easier to not hold the [TT] position when I was climbing,” explained Contador. “We had tested it this morning, and we decided to opt for the normal handlebars to avoid the aerodynamic position at first, and I think it was a good option.”

The bike change at the top of the uphill went smoothly – maybe 5 seconds lost, at most 10.  The intermediate time check at the bottom of the descent would tell, and he crossed in the quickest time: 19 minutes and 16 seconds.

When Valverde arrived at the same point nine seconds in arrears, the battle was on between the two Spaniards, fighting once more for the overall win.

Contador zoomed across the finish, stopping the clock in 36:21 and taking the overall lead provisionally. Only one rider remained out on course that could still beat him: Valverde.

Valverde slowly ate back the time, and then in the closing kilometers sealed the deal. He crossed the line 14 seconds faster than Contador and finished second on the stage, clinching the overall race win.

It was the third time this season Valverde bested Contador in the GC after winning Ruta del Sol and Volta a Catalunya.

It was the fourth time that Contador settled for second place, also missing the Paris-Nice victory by a narrow two seconds to Sergio Henao (Sky).

“I’m satisfied with my performance here and since the beginning of the season, which has been really good,” Contador emphasized. “I have missed the victory in all races for a little bit, but for me, instead of taking away my morale, it gives me extra motivation. It’s going to make me work harder because you have to wait for good things.”