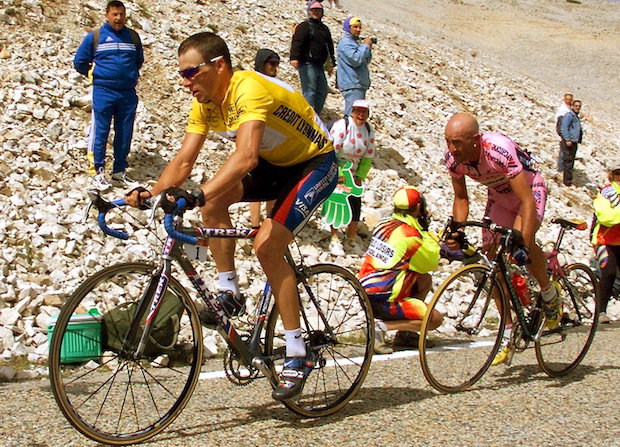 A lot has changed in the world of professional cycling in the last 30 years, from faster bikes and new technology, to smarter training and better nutrition.

If you watch an old Tour de France stage, you’ll notice a big difference in the riders’ cadence—practically all the guys back then would slap it in the biggest gear possible and grind away. It was thought that if you could ride the biggest gear for longer, then you’d go the fastest.

But the 65 RPM smash fest of yesteryear seems almost quaint after watching Chris Froome pedal away from the pack at 100 RPM on Mont Ventoux.

However, a new study published in the International Journal of Sports Medicine says that cycling at a high cadence isn’t beneficial to amateurs.

The researchers recruited 6 men and 3 women ranging from 21 to 55 years old. Two of them were regional-level triathletes, six regularly engaged in moderate exercise, and one did only light activity occasionally.

These volunteers carried out a number of experiments on a stationary cycle ergometer at moderate exercise intensity and at different pedalling cadences. Force exerted on the pedals and cardiopulmonary and metabolic responses were recorded, together with thigh muscles’ oxygenation, which was studied continuously using near-infrared spectroscopy.

The results showed that forces exerted on the pedals decreased at higher cadences, heart rate increased by 15% and cycling exercise efficiency decreased. As part of this reduced efficiency, skeletal muscle oxygenation decreased when participants pedalled at 90 revolutions per minute (the highest cadence tested).

Lead author Dr Federico Formenti said: “Pedalling at cadence greater than 90 revolutions per minute is advantageous for professional cyclists, but appears inefficient for recreational cyclists. When cycling at low exercise intensity, skeletal muscle oxygenation is mostly unaffected by cadence, indicating that the cardiopulmonary and circulatory systems can effectively meet the exercising muscles’ demand.

“However, at a greater exercise intensity, high cadence reduces recreational cyclists’ efficiency and skeletal muscle oxygenation, suggesting a reduced ratio between oxygen being delivered to and taken up by the exercising muscles.”