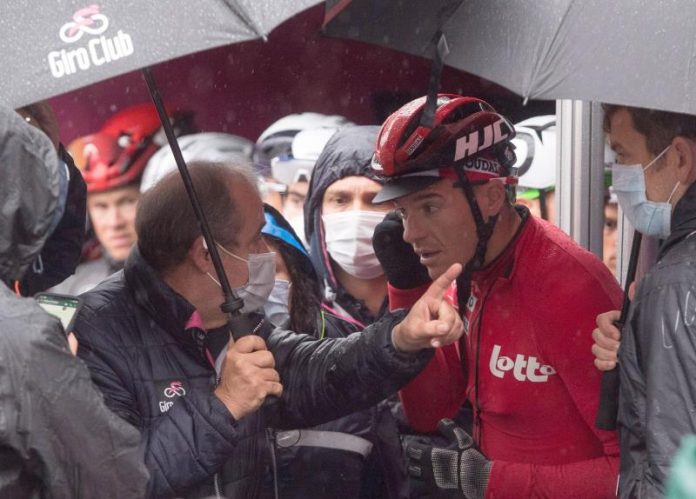 (Reuters) – Furious Giro d’Italia director Mauro Vegni said that “somebody will pay” after a protest by riders forced the 19th stage of the race to be halved in length on Friday.

After organisers agreed to shorten the route due to bad weather, the competitors lined up as planned in the town of Morbegno for the marathon 258 kilometre stage to Asti but, after riding a leisurely eight kilometres, hopped on team buses.

They were taken to Abbiategrasso, 123 kilometres from Asti, where the race re-started.

“Reducing today’s stage will not diminish the show but will allow the immune defences of the riders not to be put at greater risk,” said the Professional Cyclists’ Association (CPA).

Adam Hansen, one of the riders, said the request to shorten the stage was made on Thursday evening and a protest was organised at the start when it was turned down.

“This morning when all the riders were under the tent no one went to the start line and riders started not to accept this and a protest started to happen,” he said on Twitter. “It was nice to see the riders sticking together as a whole.”

However, Vegni refuted this version. “I heard about the protest of some riders less than an hour before the start from Morbegno,” he said. “I’m very angry, this is a lack of respect.”

Vegni said that organisers had made a huge effort to complete the race amid the COVID-19 pandemic.

“We will get to Milan but somebody will pay,” he told state broadcaster Rai. “This left a very bad impression and obscures everything we have done.”

“We have carried out the Giro in a very difficult situation due to the health emergency, guaranteeing work for the riders and teams. Today they have hurt themselves and cycling.”