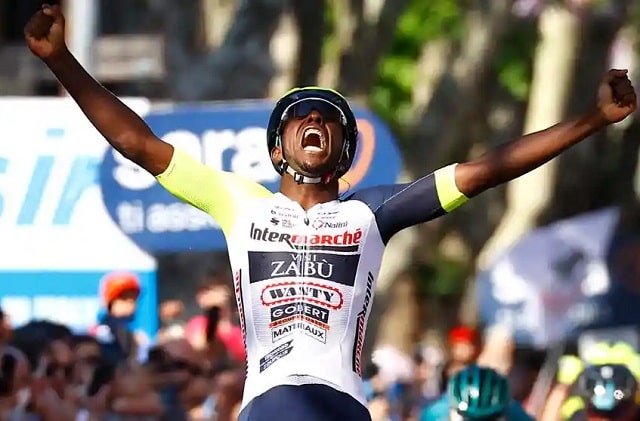 Biniam Girmay won stage 10 of the Giro d’Italia on Tuesday, making history as the first Black African to win a stage on any of the three grand tours.

You can rewatch STAGE 10 HERE

The 22-year-old Eritrean proved too strong for Mathieu van der Poel, who threw up his hands in defeat after a long struggle for the line at Jesi.

“All the team was working all day, including the GC riders, and they did a great job,” Girmay said. “We knew when we started we knew we had possibilities to win a stage. I made history thanks to my team, my family, the support from the people of my country. This victory belongs to them also. I am thankful and happy that I was able to pay back the team for a win.”

Girmay then got a champagne cork in the face when fumbling with a magnum bottle on the winners’ podium, leaving him rubbing and holding his left eye.

The Intermarche rider signalled his coming of age in March when he became the first African to win a one-day classic at Gent-Wevelgem, when still just 21.

Juan Pedro Lopez of Trek-Segafredo retained the race lead as the main contenders in the overall standings all finished together.