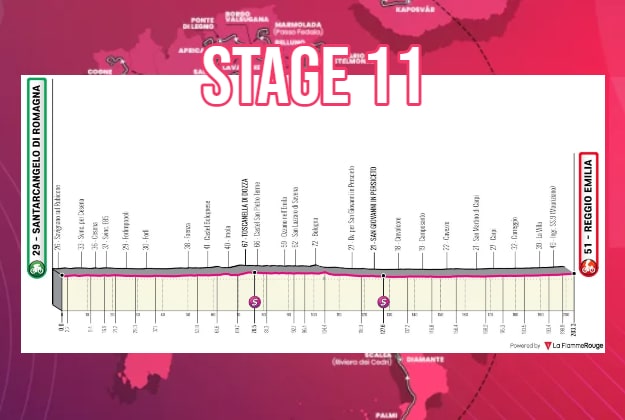 For stage 10, there was a doubt as to whether the sprinters could pass the difficulties at the end of the route in order to compete in the final sprint. In the end, punchers won. Magnificent victory for the young Eritrean prodigy, Biniam Girmay, resisting to Mathieu van der Poel.

203 km of absolutely flatness with only 340m of climbing in all today.

If you have tasks to complete, this is the time. A long, very long stage with no KOM points available. Nothing to miss in the early part with Fillipo Tagliani, leader of the intermediate sprint classification, expected to form a small breakaway that will be gently reeled in by the sprinters’ team. We will then assist to a battle between the fastest men of peloton.

Arnaud Demare – Leads the sprints jersey and is on course for a third stage win. He also actually possesses the strongest sprint team.

Biniam Girmay – won stage 10 on his first ever grand tour win and is only 3 points behind Demare in the sprints classification. The confidence will be growing.

Caleb Ewan – He was 2nd on stage 6 but the absence of Selig will be felt.

Mark Cavendish – won stage 3 but has lost Morkov for the sprint train.

Fernando Gaviria – 2 stage podiums so far, why not a proper sprint win this time?

Mufcfaan: this is the last chance for many sprinters before much harder days. Caleb Ewan has to win this one, making something out of this giro before packing his bags