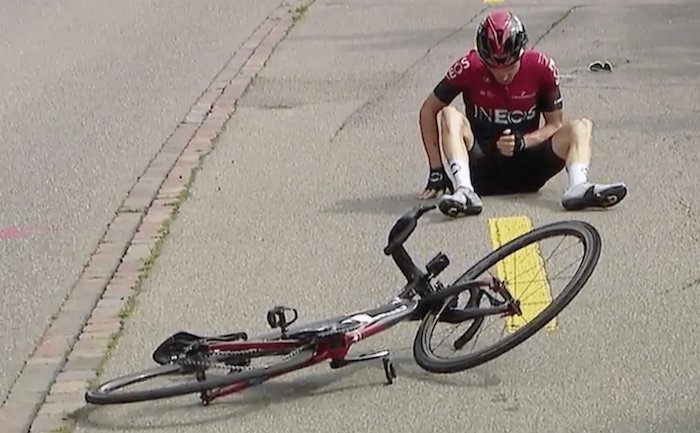 (AFP) – Six days after losing Chris Froome for the Tour de France, Team Ineos were holding their breath Tuesday over Geraint Thomas’s shoulder as he was rushed to hospital for tests after crashing out heavily at the Tour de Suisse.

The accident happened 30km from home on stage four with reigning Tour de France champion Thomas in a good position for overall victory in the nine-day Tour warm up in the Alps, but was left ashen-faced, dazed, badly grazed and nursing his right shoulder.

Ineos said on Twitter that Thomas “has been forced to abandon the #TourDeSuisse. He was alert and speaking to the team after the crash and will be taken to hospital for checks.”

Thomas came down heavily in the peloton’s high-pace pursuit of an escape. Medics swiftly removed the 33-year-old’s helmet and gingerly examined his shoulder before deciding on sending him to hospital.

Even if the Welshman has not fractured his collarbone, the crash will severely hinder his chances of reaching peak fitness for a defence of his title starting on July 6.

The incident comes less than a week after his Ineos teammate, four-time Tour de France champion Froome broke a leg, hip, elbow and ribs in a horrific fall in the Criterium du Dauphine.

Ineos still have Colombian protege Egan Bernal in the running for victory here, he showed true class when winning Paris-Nice in March, and the 22-year-old all rounder is the bookies favourite for victory in France this July.

The Tour de Suisse continues until Sunday with three crunch mountainous stages and an individual time-trial still on the menu.