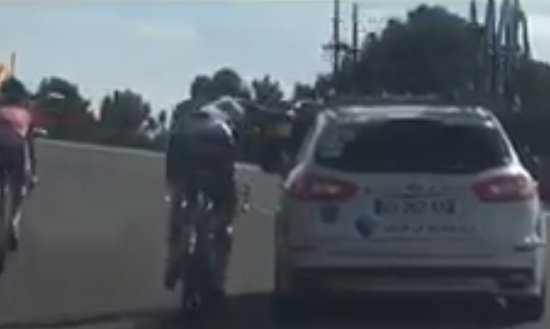 AG2R La Mondiale cyclists Alexandre Geniez and Nico Denz have been withdrawn from the Vuelta a Espana for deliberately holding onto the team car during the race.

Oups! Those cyclists must be strong to push that team car all that way#LV2017 pic.twitter.com/xjHhbsKE05

“After viewing the video footage that showed two of our riders intentionally holding onto the team car on Sunday, management of the AG2R La Mondiale team has decided to withdraw Alexandre Geniez and Nico Denz from the Vuelta a Espana,” a team statement said.

“The AG2R La Mondiale team sincerely apologises to the organisers and the public for the unsportsmanlike behaviour of our riders, which is contrary to our values and our ethics.”

Geniez issued a statement of apology via social media on the morning of stage 16.

“I made a mistake in hanging on to the car of the sports director during the final of the 15th stage of the Vuelta. The team management of tAG2R-La Mondiale has decided to remove me from the Vuelta a Espana. This is difficult but I have to accept it

“I sincerely apologize to the organizers and the public, but also to my teammates for this behaviour contrary to the values of my employer.

“I had a tough start to the season and today I just want to show on the bike that this incident does not reflect my vision of the sport.”