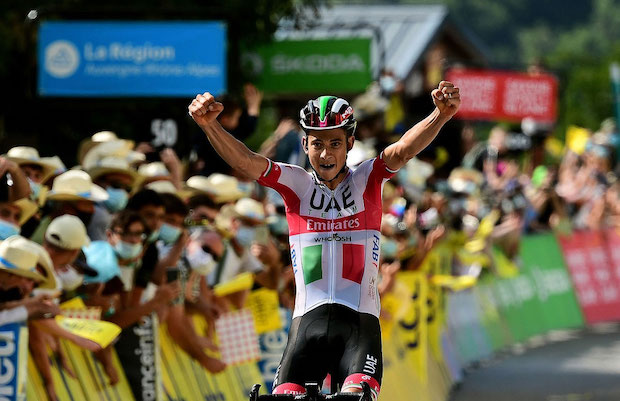 Davide Formolo (UAE Team Emirates) held off the favorites group to win stage 3 at the Criterium du Dauphine after a gutsy ride in the last 65km.

Race leader Primoz Roglic (Jumbo-Visma) finished 33 seconds behind in second place to further build on his overall lead in the race, while Thibaut Pinot had to settle for third.

Egan Bernal (Team Ineos) struggled in the last kilometre as he dropped off from the favorites group in another disappointing day for the British team.

“I was in the break from the start with eight guys, and already before the Col de la Madeleine I said ‘we only have three minutes – there’s no way to wait until the finish’,” Formolo said.

“So I said to myself ‘just ride your good rhythm on the Madeleine, and try and get some space between the bunch’. Then I actually thought the last climb started straight after the descent, but it was 10km up and down in the valley. That was really hard – I lost a lot of energy in the valley.

Incredible solo effort from 🇮🇹@davideformolo who fought until the last meters!
⏪ Relive the last kilometer.#Dauphiné pic.twitter.com/0J4VcijEp5