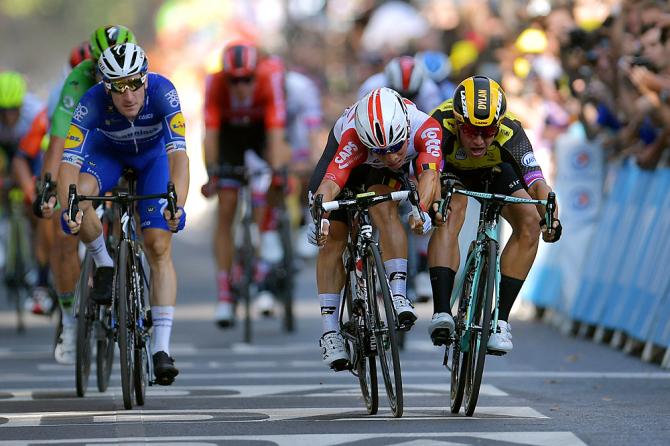 Caleb Ewan completed his set of grand tour stage victories when the pocket-sized sprinter pipped Dylan Groenewegen to the line to win the 11th stage of the Tour de France.

The Lotto Soudal rider surged past Groenewegen in a mass sprint to prevail by a few centimetres, with Elia Viviani taking third place.

Riding the Tour for the first time, Ewan timed his effort perfectly to add to his solitary Vuelta a Espana stage win and his three Giro d’Italia victories.

“I knew if everything was coming together, I could be the fastest on the day. With 10km to go, (our lead-out man) Jasper (De Buyst) crashed. I was at the back of the bunch, but Roger (Kluge) came back for me and took me back to Dylan Groenewegen’s wheel in the last kilometre.

“Luckily I had the legs to finish it off. This is a childhood dream come true. There’s no other race that I’ve wanted to win as a kid. The Tour de France is something so distant from Australia, something we watch on TV… it’s fantastic.”

The final sprint was somehow chaotic with a spectator’s phone hitting Niccolo Bonifazio’s helmet with 100 metres to go, ruining the Italian’s chances.

There were no major changes in the overall standings but twice runner-up Nairo Quintana was involved in a pile-up some 30 kilometres from the finish.

He made it back to the peloton, however, before the final sprint with a bruised elbow.

Niki Terpstra could not get back on his bike and abandoned the race while former overall leader Giulio Ciccone, who also crashed, was unable to rejoin the pack and dropped out of the top 10 in the general classification.

Breakaway rider Aime De Gendt was reined in by the pack with 4.5 km left after attacking from the start with Frenchmen Stephane Rossetto, Anthony Perez and Lilian Calmejane.


De Gendt saved himself for a late attack, which earned him the day’s combativity award, much to the annoyance of Rossetto, who said the Belgian had not pulled his weight in the breakaway.

“He did not give everything like we did and at the end he goes solo, I’m so angry,” said Rossetto.