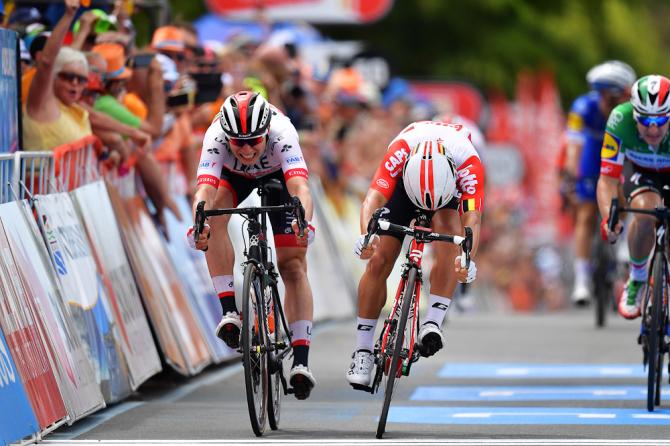 Race leader Patrick Bevin (CCC) crashed and fifth stage winner Caleb Ewan (Lotto Soudal) was disqualified on a dramatic penultimate day of Tour Down Under outside of Adelaide on Saturday.

Bevin’s ochre leader’s jersey hopes were in the balance after he was taken to hospital with a suspected rib and collarbone injury from a crash nine kilometres from the finish at Strathalbyn.

Bevin hopped back on his bike while his CCC teammates waited for him and he was able to rejoin the peloton to not lose any time.

There was further drama when Australia’s ‘pocket rocket’ sprinter Caleb Ewan was disqualified after he was first across the finish line for what race commissaires said was an “irregular sprint”.

Ewan appeared to headbutt Jasper Philipsen (UAE Team Emirates) as he attempted to take his spot on the wheel in front of him and Ewan was relegated to last and Philipsen declared the winner.

Bevin looked a forlorn sight as he dismounted from his bike and sought medical attention cutching his right side, bleeding from his leg and elbow and with the back of his jersey shredded.

The CCC Team was hopeful Bevin would take his place at the start of Sunday’s final stage, featuring a gruelling hilltop finish to Willunga.

“We knew there was a crash and you see the race leader on the ground with three of our jerseys standing around,” Team CCC owner Jim Ochowicz said. “We had to get a bike change because his bike was broken.

“It was so close to the finish that yeah, it’s hard to get that back. But the whole team stopped and got him back in the game, now we’ve just got to wait and see.”

Mike Woods said that Impey had sportingly called for the peloton to slow after Bevin’s crash.

Impey tweeted after the stage:“Another great team performance today. Happy to grab 5 seconds more but I hope @PaddyBevin is going to be ok and can race tomorrow. He has had an amazing race so far.

“One mustn’t try prosper off someone else’s misfortune. I feel sorry for Bevin.”

Ewan was relegated to last place in the group, deducted 15 points from his place in the points classification and imposed a 30-second penalty on his overall race time.

Tour Down Under 2019 – general classification after stage 5: