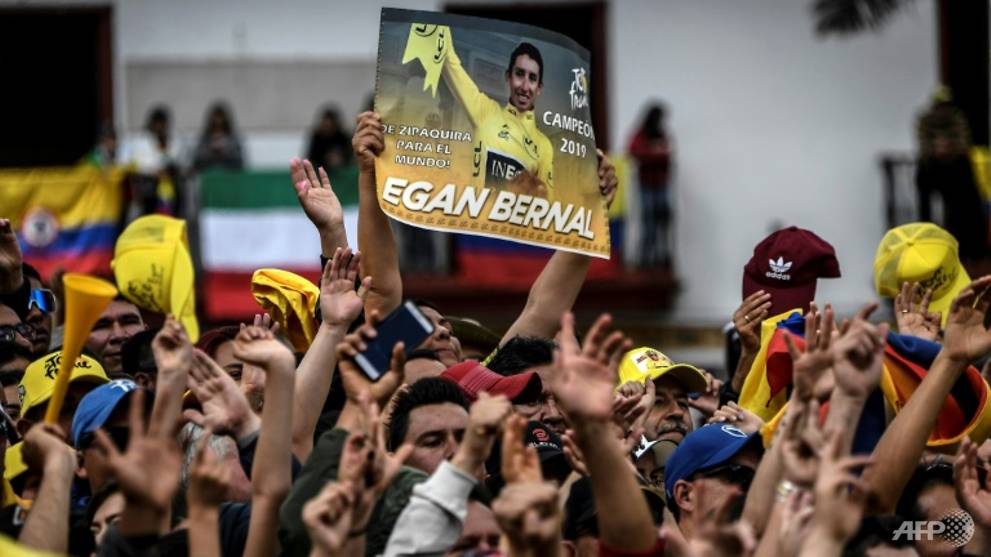 (AFP) – Tour de France champion Egan Bernal was given a hero’s welcome by around 10,000 people as he returned to his home town of Zipaquira on Wednesday to celebrate his historic achievement.

The 22-year-old climber became last month the first Colombian to win cycling’s most prestigious race in only his second participation.

“I’ll never forget seeing so many people gathered for me,” said the Team Ineos rider from a stage on Zipaquira’s central square where fans and well-wishers had started gathering from 5:00 am on what was also the 200th anniversary of Colombia’s independence.

“Everything happened so fast that until now, when I see you there, I’m only just starting to realize what this meant for Colombia,” he told the cheering crowds.

“And the truth is that it makes me very proud to be able to give something to society and to give Colombia hope.”

Bernal had arrived back in Bogota on Monday after competing in a series of European criteriums following his Tour win.

He was transferred by police helicopter the 46 kilometers from the capital to his home town but there he shunned an ostentatious parade through Zipaquira in favor of a simple podium on the central square.

And while the man he replaced as Tour champion, his teammate Geraint Thomas has predicted he will win 10 more Tour titles, Bernal remained humble to his core.

“It was my dream to win the Tour de France and now I’ve done it,” he said. “I’m not sure I’ll be able to win it again … what I want is to continue enjoying climbing on my bike.”

He was the third youngest Tour winner in history and the youngest since 1909, leading many to predict a glorious future in which he challenges the record five victories of greats such as Jacques Anquetil, Eddy Merckx, Bernard Hinault and Miguel Indurain.

“Winning the Tour is very difficult, I can’t imagine winning five,” he said. “Hopefully, but if not, I’ll still feel happy because I gave something to Colombia.”

Having achieved one dream, Bernal is already contemplating another: the Olympics.

“I want to make the most of the here and now. I’m not thinking about next year or the next races,” he said. But “I’d like to go to the Olympics, it’s a race I like a lot.”

After thanking his fans and speaking to the press, Bernal donated his yellow jersey to the Colombian Cycling Federation and gave his white jersey — won for being the best young rider in the race — to his first trainer, the former cyclist Fabio Rodriguez.

And he spared a thought for Bjorg Lambrecht, who died earlier this week aged just 22, like Bernal, following a crash at the Tour of Poland.

“I competed in many races against him. It’s very tough, it makes me really sad,” said Bernal.

Born in Bogota to a watchman father and a mother who graded cut flowers for export, Bernal grew up in Zipaquira.

When not racing abroad, he still lives close to his parents, trains in the surrounding mountains and rides alongside his brother.

Rubbing shoulders with some of Colombia’s greatest former cyclists — Lucho Herrera, Patrocinio Jimenez and Mauricio Soler — in the VIP area behind the stage was Bernal’s 75-year-old grandfather, Alvaro Julio Bernal.

“It’s a great story for Colombia and for the whole country,” he said, biting his lip to control his emotion.

Rosadelia Pachon, a 60-year-old with long black hair and dressed in traditional clothes, had come early to catch a glimpse of the day’s star.

“We’re very happy and we hope he’ll keep flying the Colombian flag as high as possible,” she said.