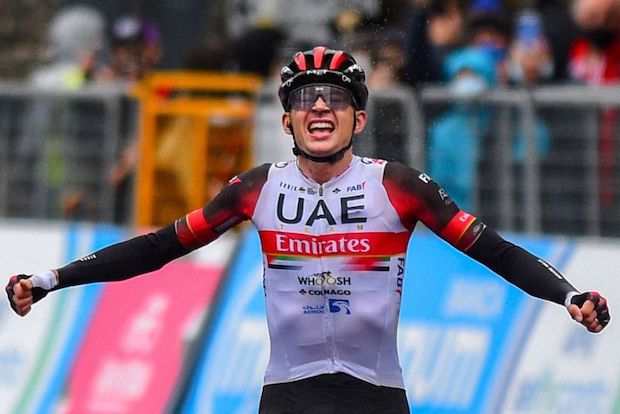 Joe Dombrowski claimed his first professional win outside of the United States by taking victory in stage four of the Giro d’Italia on Tuesday, while Italian Alessandro De Marchi took the overall leader’s pink jersey from compatriot Filippo Ganna.

You can rewatch STAGE 4 of 2021 Giro d’Italia HERE

Dombrowski surged ahead of De Marchi during a gruelling climb at the end of a rain-soaked 187km ride from Piacenza to Sestola and finished 13 seconds ahead of the Israel Start-Up Nation rider.

But De Marchi moved to the top of the general classification to take the pink jersey, 22 seconds ahead of Dombrowski in second place.

“I’d been thinking about the maglia rosa (pink jersey) all stage and even in the last few days. I’d thought I’d lost my chance at one point and would have been devastated after making a mistake but the famous rule came true: never give up,” De Marchi said.

“In end it all worked out. I’m going to cry if I think about it. This is small reward for the thousands of attempts I made during my 11-year career. I’m going to try to really enjoy it. It’s for me and my wife Anna.”