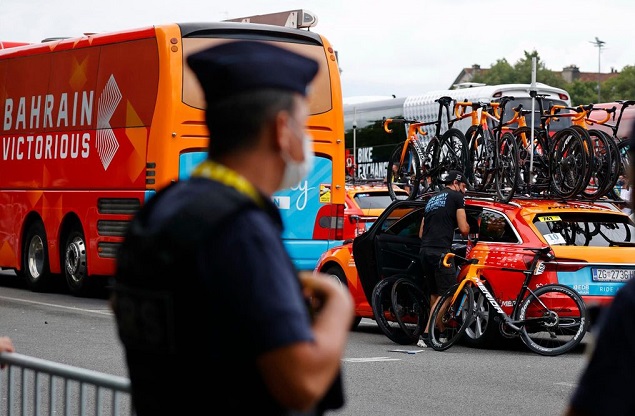 Danish police raided the hotel of Bahrain Victorious early Thursday on the eve of the start of the Tour de France in Denmark.

The event led to an excruciating silence at their pre-Tour press conference in the afternoon.

The team announced the raid itself just a few days after similar raids at homes in France — which they described on Monday as “intentionally damaging the team’s reputation” — and a year after their hotel was raided during the 2021 Tour.

In a statement, the European Union Agency for Criminal Justice Cooperation (Eurojust) said 14 properties in six countries were searched and three people were interrogated.

Substances were also seized in Belgium, Italy and Poland, plus computers, phones and other electronic devices. Police also searched properties in Spain and seized potential evidence.

The investigation was opened in May and led by prosecutors in Marseille, France, Eurojust said, adding the target was “suspected doping violations involving an international cycling team.”

“The team is now looking forward to focusing on the greatest cycling race in the world, the Tour de France.”

No charges have been brought against the team following the search and confiscation of materials during the 2021 Tour.

Matej Mohoric and Jack Haig both refused questions on the issue when faced by a bevvy of reporters.

No other questions were forthcoming in the event scheduled to last 30 minutes and the conference was closed in record time.

“The team are totally concentrated on the race and the riders will only answer questions about this,” he said.