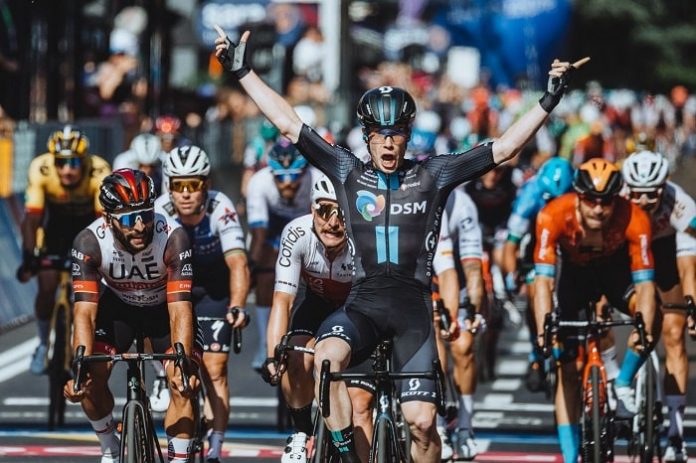 Alberto Dainese (DSM) became the first Italian winner in this year’s Giro d’Italia when he edged the sprint to take stage 11 in Reggio Emilia on Wednesday.

You can rewatch STAGE 11 HERE

Dainese who had never previously won a stage in the Giro, beat the Fernando Gaviria in the dash for the finish. Another Italian Simone Consonni took third.

Juan Pedro Lopez (Trek-Segafredo) retained the leader’s pink jersey after a 203-kilometre stage which was relatively comfortable other than the heat and wind.

Richard Carapaz, however, pocketed three bonus seconds in an intermediate sprint to climb two places into second, equal in time with the Joao Almeida, 12 seconds behind Lopez.

Biniam Girmay, who on Tuesday became the first black African to win a stage at the Giro, pulled out before the start following a podium accident after his win. The unfortunate Girmay was hit in the left eye by a prosecco cork while celebrating his historic stage victory.

With temperatures hitting 30 degrees, the peloton largely stuck together apart from one wishful breakaway by Luca Rastelli and Filippo Tagliani which was reeled in just after halfway.

Belgian Dries De Bondt embarked on a solo raid 58 kilometres from the finish, which ended just 1,300 meters from the line.

In the sprint, Arnaud Demare, who already has two stage wins to his name in this Giro, attacked from deep.

He was hunted down by Gaviria before Dainese, taking full advantage of the slipstream, came through to take the third victory of his career.

Last year, he finished second in a Vuelta stage, behind Fabio Jakobsen.

The peloton faces its longest day in the saddle on Thursday with a mountainous 12th stage of 204 kilometres which crosses the Apennines from Parma to Genoa.