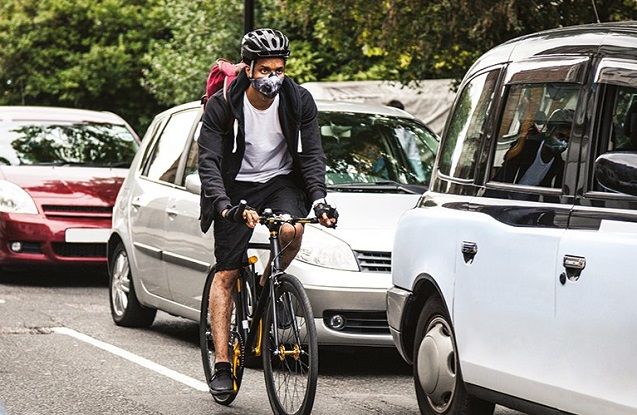 A collaboration between Kings College London, the Camden Council and the Healthy Air Campaign appears to show that those who travel by car are exposed to pollution levels five times those who cycle, and 3.5 times those who walk.

Air pollution detectors were fitted to one person driving a car, one on a bus, one on foot and one on a bike, all in London.

Someone travelling in their car will be subjected to a greater volume of pollution because exhaust from other vehicles enter the car and isn’t able to disperse. Cyclists, on the other hand, don’t have the fumes trapped in close proximity to them.

Dr Ben Barratt, lecturer in air quality science at Kings College London, said: “By walking and cycling you’ll not only create less air pollution yourself but you can reduce your exposure to air pollution. You can take a step further by taking quieter routes away from this traffic.”

“But avoiding air pollution is not a sustainable option. This is a very important point. We need to take more action by government to reduce the amount of air pollution in cities.”

The study, which measured cumulative levels of black carbon (soot), was carried out to highlight the risks and what people can do to minimise their own exposure to traffic fumes. Unsurprisingly those on quieter routes were exposed to lower levels of pollution than those on the busy routes.

Gavin Thomson, of the Healthy Air Campaign, said: “I would ask people to plan their routes and try and stay off main roads, take quieter routes instead, or walk through the park, whether that is on their way to work or wherever they need to go. Also try and find the air pollution levels where they are spending most of their time.”

The reason those travelling in cars experience much greater fumes is the exhaust from other vehicles enters from in front and behind and, once there, doesn’t disperse.