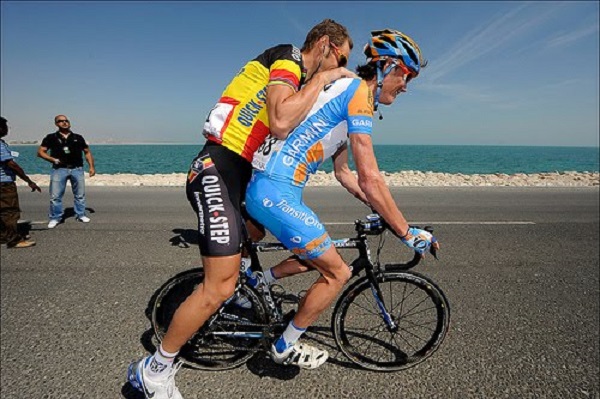 We all know that drafting is an important part of road cycling.  As a cyclist moves forward he produces a turbulent wake of air behind him called vortices. The vortices  create a low pressure area behind the rider and an area of wind that moves along with him.  Think of how a motorboat creates 2 wakes of water behind it with a calm area directly behind it.

If you draft behind another rider who is cutting the wind you obviously gain a significant advantage. Up to 40% less energy can be used in the draft. The low pressure moves you forward and the eddies push you forward.

It’s easy to skip over the concept of drafting because we all understand it, but doing it well is another matter, and something that takes patience and practice. As a starting point, you will get some decent gains sitting half-a-wheel’s width from the back of another rider, and this will allow some comfortable adjustments for change of direction and speed.

It’s most important when following a wheel to relax and avoid any sudden change of direction or sudden braking. This goes for the rider on the front of a line too as it is no better to have someone crash into the back of you than someone suddenly stop in front. Once a ‘string’ or ‘pace line’ is operating, you are part of a chain of people and the golden rule is to consider everyone in the line. You are in it together, helping each other smooth out the ride and keeping everyone safe.

The benefit of drafting gradually increases from the second rider to the fifth before starting to level off. In groups up to five, the last rider enjoys the most aerodynamic benefit. But in a group of six to eight, the next-to-last position feels the least wind resistance. In a big, hard-charging pack, the best position is between fifth and eighth. You get a large aero benefit and you’re less likely to get into a crash.

The end of a paceline can get sloppy as riders accordion forward and back to stay on. Because there’s no one behind the last cyclist to push the low-pressure bubble, it sometimes feels harder to bring up the rear. As you drift back, spin a little faster starting at least two people before the end so when you’re ready to slide in, you don’t have to play catch-up.

Overall staying relaxed but alert is the art of riding well in a group. This is a fine balance that requires a special sort of psychological focus to get right. As much as anything else this is mind training, and any sports psychologist will tell you that focussed practice and visualisation are critical tools in your performance armoury.