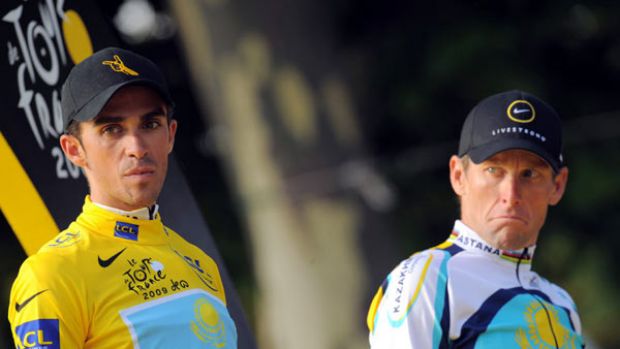 Alberto Contador has offered his side of the story of his intra-team clash with Lance Armstrong at the 2009 Tour de France when he beat his Astana teammate to take his second overall win.

“The 2009 Tour started with controversy between Armstrong and me over who was the leader,” Contador told Spanish youtuber Sanjuan.

“The Tour started with a lot of controversy about if the leader was Armstrong or if it was me. I was back at the Tour after winning in 2007, and winning the Giro and Vuelta in 2008; because they did not let us race in 2008, and I said to myself I was going to win no matter what. Lance was returning to cycling, to my team, and he obviously wanted to win the Tour as well. Only one can win, and there was tremendous tension. One day, I skipped my siesta and went to his room to speak with him about it, and he said, ‘it’s better for me if you win the Tour.’ That was the day before the first time trial in Monaco. There was tremendous tension every night at the dinner table, not so much for us, but for the teammates, the staff, everyone. Then later that afternoon I saw on Twitter, ‘tomorrow in the time trial we’ll see who is the leader.’ So all that was a waste of time and I missed out on my siesta.”

“I had taken time on him in the first time trial, and then in stage [5] there was some wind. I went to speak to George Hincapie, who was his friend, who said they were going to split the peloton. Late in the stage there was a split, and Lance was in the front group, and I was caught behind in the second. And it was my own team at the front pulling when I was supposed to be the leader. I got to the finish line, my press officer and brother told me to calm down, get on the bus, take it easy. Then they said the radio had broke. Armstrong took 40 seconds on me, and he was ahead of me on the GC. So he was now the virtual leader.”

“Finally I was on favored terrain, and then they said in a team meeting the night before, ‘We are going to race ‘tranquilos.’ Let’s stay all together and when we get to the climb, just ride tempo, and we’re not interested in anything else.’ And I was in bed thinking, I’ve been waiting to arrive at the mountains and [then] explode the race, and now they are telling me to take it easy? Later I went to see a teammate who was a bit neutral and he said, ‘Alberto, before you’re the one left looking like a fool, let it be him.’ Evans was the first to attack, then Van der Broeck, and I said, ‘this is mine.’ I attacked, caught them and arrived alone at the top. I moved ahead of Lance on the GC. There was a lot of tension inside the bus. And this was building since the spring when he was saying things about me on Twitter all the time.

The next morning on the bus, Johan [Bruyneel] was saying things didn’t go as we planned, and if anyone had anything to say. Lance raises his hand and said, ‘yes,’ and said that I had not respected the tactics of the team. I cut him off and said, ‘If you want respect, you are the first one who has to show it. You have been disrespecting me and the rest of the team since the beginning of the year.’ Then he cuts me off and says, ‘OK, Pistolero.’ Then there was absolute silence on the bus. Nobody said a word, not the riders, the sport directors, the helpers, and finally someone opened the door of the bus, everyone got out, and it was just Lance and me alone on the bus. He took me to the back room of the bus, which used to be shared among everyone, but since he came back it was his, and he said, ‘Don’t fuck me.’ That pushed the tension through the roof.”

“Since the beginning of the year he was saying things about me on Twitter. If he thought that those things were going to throw me off, he was wrong. Every time he said something like that, it just motivated me more than ever. I had the confidence, that if my bike was always with my mechanic, if my food was taken care of, and if it only depended on my legs, everything would work in my favor. Three days before the Tour, they told me that my rider of confidence, who was Benjamin Noval, was not going to be going to the Tour, I said, ‘what is this a joke?’ They were constantly trying to throw me off my game. Even before the time trial in Monaco, I had to buy a set of my favorite wheels off of another team because we only had two, and they were both for Lance. Now we laugh about it, but at the time, it was heavy.”