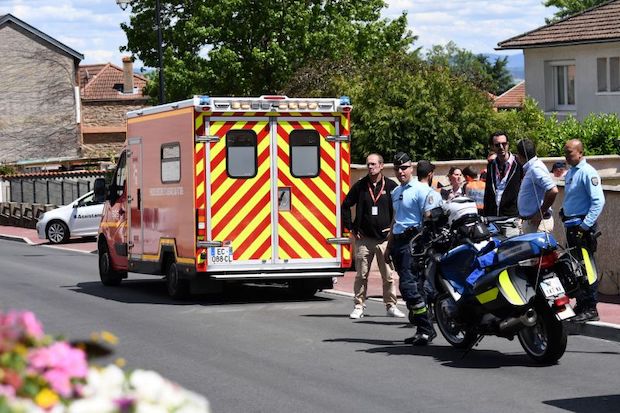 (AFP) – Chris Froome will miss the Tour de France after hitting a wall at high speed and suffering severe injuries in a training accident at the Criterium du Dauphine on Wednesday, Dave Brailsford has confirmed.

“It’s clear he’ll take no part in the Tour,” Brailsford told French television while four time Tour de France winner Froome was being treated at the scene in a parked ambulance.

“Chris was taken to Roanne Hospital, where initial examinations confirmed multiple injuries, most notably a fractured right femur and right elbow,” Team Doctor Richard Usher said in a team press release. “He has also suffered fractured ribs. He is now being airlifted to St Etienne University Hospital for further treatment.

This year’s Tour de France embarks from Brussels on July 6 and the loss of the British rider will shake up ambitions at several teams.

“He is in a very, very serious condition,” said Brailsford, adding that the racer was having difficulty speaking and would be helicoptered to hospital.

A witness at the scene of the accident said Froome had suffered an open fracture of the femur and had suffered other injuries too, notably to his elbows.

Brailsford said Froome had been speeding downhill with Dutch teammate Wout Poels on a ‘recon’ ride for Wednesday’s time-trial when a gust of wind blew him off track and into a wall.

“They were going very fast and the wind got his front wheel and sent him straight into the wall,” Brailsford said.

“He could hardly speak. He’ll be helicoptered to either Lyon or Saint-Etienne hospital within a few minutes,” said Brailsford.

“We hope he gets well soon. The Tour de France won’t be the same without him. Chris Froome has been the central character at the Tour since 2013,” he said.

“His withdrawal changes the whole thing. Even if they have the title holder Geraint Thomas and let’s not be lured into underestimating Egan Bernal, who will be his lieutenant or possibly more,” Prudhomme said of two key Ineos riders.

Romain Bardet, who came second to Froome on the 2016 Tour de France, described the news of the extent of his fellow rider’s injuries as awful.

“I didn’t realise it was that serious,” Bardet said when told after the time-trial won by Wout van Aert. “That’s dreadful. It’s never nice when one of your rivals gets unlucky like that.”

Froome’s last major win came at the 2018 Giro where he also fell while doing recon for the opening day time-trial around Jerusalem, suffering early in the three week race before a spectacular late rally.

He also fell on stage one of the 2018 Tour de France where he eventually came third behind Geraint Thomas and Tom Dumoulin.