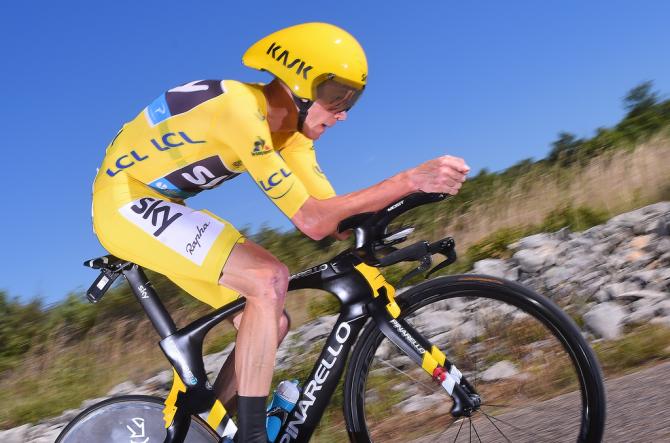 After battling for 3,390 km around France, slogging up the climbs of the Jura, the Pyrenees, Massif central and finally the Alps, Froome has emerged 23 seconds clear of his closest rival and admits that the yellow jersey is now his to lose.

Saturday’s individual time trial around the streets of Marseille should be routine for the Team Sky rider.

Barring a crash or a mechanical failure he will emerge into the Stade Velodrome with the yellow jersey secured for a third successive year, and his fourth in total, before Sunday’s traditional Champagne ride into Paris.

“Certainly, at this point, it’s my race to lose,” Froome said after an incident-free day rolling along at the front of the peloton on Friday’s stage 19, behind a breakaway group from which Edvald Boasson Hagen claimed a solo victory.

“Froome has to have a hiccup to lose that race,” LeMond told Reuters. “You never know what can happen. A flat tyre, a broken wheel; it happens… you can get nervous and you make a mistake.”

Froome’s nearest challenger for the yellow jersey is Romain Bardet, who he beat by 39 seconds in the Tour’s opening time trial in Duesseldorf.

Rigoberto Uran, who trails by 29 seconds going into the Marseille time trial, is probably the man most likely to benefit from any problems Froome encounters. Uran, like the Briton, is capable of a scorching time trial, even if he did struggle in the Duesseldorf rain three weeks ago.

Froome has time in the bank but that can pose a conundrum: whether to attack or defend?

“It’s definitely a fast course, there’s a small climb out the back of Marseille. I think it suits me well,” he said. “It’s quite a power time trial. I have to treat it like any other time trial. I won’t take any big risks like in Duesseldorf, but when I can push, I will push.”

Froome’s rivals, on the other hand, have to go for broke and hope for the best.

“I would rather be in my position than having to make up time. That gives me a lot of confidence,” he said.