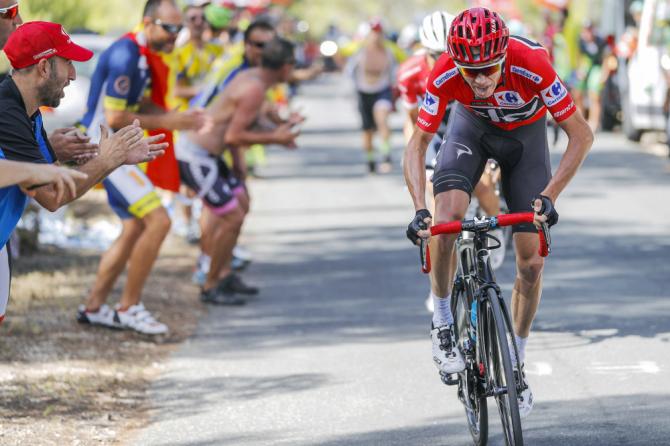 Chris Froome put in a strong performance to extend his Vuelta a Espana race lead following a tough finish of stage eight.

The Brit dug deep on the fiercely steep slopes of the Alto Xorret de Cati, pacing himself as attacks fired clear up ahead. Yet as the first-category climb wore on Froome arrived at the fore, putting in a big acceleration to distance the majority of his rivals.

With only Alberto Contador (Trek-Segafredo) able to live with the race leader over the top of the climb, the pair finished together, 17 seconds ahead of the next chasing GC group.

“I wasn’t chasing the stage victory today. It was all about the general classification”, said Froome. “But I’m going to take advantage of it while my legs are feeling good and it makes sense for me to keep pushing. I think most importantly for me was to keep trying to open up the time gaps. We’ll see where we’re at after the first rest day.

“I know I keep saying it every day but really a massively thank you to my team-mates – in particular today Ian Stannard, Christian Knees and David Lopez. They did pretty much the whole stage again to control the breakaway and keep me in red. If I’d been on any other team I think they would have said we’ll let the red jersey go today because the guys need a break. The guys have been so strong and it’s thanks to them I’m still in the red jersey.”

“I’m just really happy to increase my lead to most of my rivals, and to be feeling the way I am at the moment after a tough Tour de France. It’s a fantastic feeling to be feeling like this.”